Here we are folks, only 2 episodes of The Walking Dead Season 3 left.  I had high hopes that we would be getting started on the action and build up to the war between Woodbury and the prison but this week, it kind of meandered with an Andrea centric show.  It was…good but kind of boring as we didn’t have any real action and Andrea’s character is just not that interesting to me.

Andrea has finally broken ties with the Governor and there is no more pretending that everything is alright from either of them.  Milton tells Andrea the truth about the Governor’s plan – get Michonne and kill the rest – and she is horrified but doesn’t seem too surprised.  I think what really gets her is what she and Milton find in one of the buildings: Phillip has created his a torture chamber with chains, manacles, a dentist chair and plenty of tortury instruments to play with.  What makes it worse, is that Andrea knows that Phillip is intending to use this place for Michonne.  She leaves Woodbury, going past Tyreese and Sasha and makes things a little more difficult for them as they would not stop her a.k.a kill her to prevent the abandonment.

Andrea quickly goes from being a strong woman and defying her man to being hunted by the Governor and this is when we really see the man for who he is.  There is maniacal joy in his face as he chases her through a field with his truck, then as they are playing cat and mouse in an abandoned building; he gets so much pleasure in terrifying her as he searches for her.  But my complaint is, it looked like there were 3 buildings where she ran, how did he pick the exact one she was in.  Anyway, after he finally finds her, she gets away by opening a door and letting a group of walkers out, right at the Governor.

After Andrea jumps the wall and Tyreese and Sasha get chewed out by Martinez, he tells them to get in the truck, they have work to do.  You can see that Tyreese has some concerns that they are going to go after Andrea but he finds out it is worse as they head to the walker pit, the place where the Governor is keeping his zombies for the fights he was holding.  Along with Tyreese, Sasha and Martinez is Allan and his son (I think that is his name, the ones that were with Tyreese at the prison) and there are some hard feeling between them -Allan’s woman found comfort in Tyreese’s strong arms?  Tyreese is becoming concerned about what the Governor is planning for Rick and the others and Allan doesn’t make it better.  The two fight and Tyreese can end him, holding him over the pit but Tyreese is a good guy and doesn’t do it.  Later, under the cover of the dark, someone firebombs the pit and makes the walkers all crispy.  But who could it have been?  The Governor goes directly to Tyreese but knows it was not him soon enough and Tyreese is still not ready to leave the safety of Woodbury.

And what of Andrea?  She made it to the treeline outside the prison and just as Rick is about to turn and see her, Phillip pulls her to the ground.  The last we see of her, Andrea is tied up in the torture room to the chair.  This is not going to end well for her. 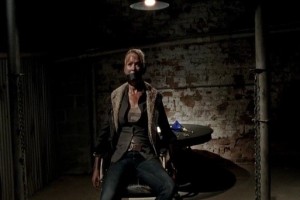 Final Thoughts: This wasn’t the most exciting episode and I think the Andrea story could have been shorter and inter-laid with other things.  I find the episodes that deviate from the prison and that group boring anyway.  Two left and hopefully they will be as action filled and tense as most of the season has been and not as slow as the last 3 episodes.

This entry was posted on March 19, 2013 by Denise in Reviews, T.V. Reviews and tagged the Governor, The Walking Dead, tyreese, walkers.