The Gist: A small Maine town is overrun by the undead when a vampire moves into an old haunted house overlooking the community.  It’s up to a writer, a doctor, a kid and an alcoholic priest to banish the evil and try to save those infected by the vampire and what remains of their town.

My Take: From what I recall, this is one of only 2 Stephen King tales that were previously adapted from a novel, made into a mini-series/movie, then remade and updated.  The Shining is the only other one that I can think of right now (and that mini-series will be reviewed soon).  As for this version of my favourite King novel, it was lacking. Lacking depth, interest and scares.  I remember watching the original one when my parents were on holiday back when I was 15 and it scared me.  The creepy little kids, the Nosferatu looking vampire Barlow and just the whole atmosphere of it.  Sure the effects weren’t great and the make-up was not the best but it scared me. 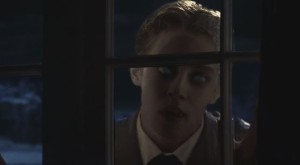 This adaptation didn’t have any scares and while the cast is impressive and seeing Rutger Hauer as a vampire is a treat (well many 20 years ago he would have been more impressive) the characters felt hollow and uninteresting.  And I didn’t like how it had Rob Lowe reading parts of the book as a voice-over to tell the viewer what is happening because the film couldn’t keep the story going.

Yah or Nah: I love the novel and mark it as my favourite King book with The Stand and It coming closely behind but this adaptation just didn’t live up to his tale of vampiric terror.  I say Nah to this mini-series, even with the good cast and good production value it is dull and lacking substance.  Give this one a pass and watch the original version or better yet, read the book and enjoy the story without being influenced by either version.