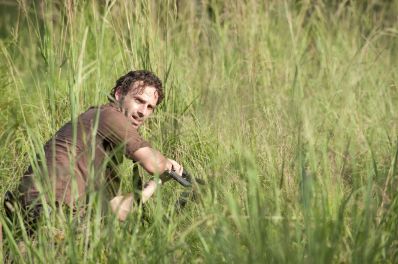 This episode felt a bit slow to start with all of the action and moving the story forward coming in the last 10ish minutes.  Which isn’t a bad thing.  After all that happened in the last episode and before the mid-season break, a regrouping one is good.

In Woodbury the citizens are putting up their barricades and getting back to life and the Governor is trying to make amends with Andrea after she found out that Glen and Maggie were being held in the town.  He is pushing her to take on leadership and she is considering it but she wants to go to the prison to see her friends and Philip is not on board with that.  The Governor also pays a visit to Milton to ensure that his loyalties still lie with him.  Milton is a jittery little man but he is loyal.  When Andrea goes looking for the Governor and his henchmen, Milton plays dumb really well:  “Where is the Governor?”  “On a supply run?”  “Can you give a specific answer, where is he?”  “On a run?”

Daryl and Merle are tramping through the woods, already arguing and at odds.  Merle is making everything a competition and Daryl just wants to get somewhere safe, wanting to go back to the prison to try to convince the others to let Merle stay. It is also here that we find out that Merle and Daryl had originally planned to rob the camp, all the way back in Season 1, and make off with their supplies and weapons.  But when that didn’t happen Daryl tells Merle he changed, and he also tells him its his own fault that he was chained to the roof and lost his hand.  While they argue, Daryl hears a baby crying and runs toward the sound where they encounter a small family being attacked by walkers, the baby is crying in a car as a walker is inches from getting its mother. Daryl jumps in and saves them all and there two rather gory kills -walker head smashed on the window and then the one that gets mashed by the trunk.  Pretty gross but we are getting more and more hero action from Daryl – swoon.  Merle being Merle starts to rifle through the family’s belongings to take what he wants but Daryl stops him, pointing the cross-bow at his head. They argue some more, Merle rips Daryl’s vest (noooo) and we see some pretty brutal scars marking up his back.  This is where we find out that their father beat them both but Merle left Daryl at his mercy and didn’t do anything to stop the abuse.  Daryl is done with Merle and walks away from his brother. 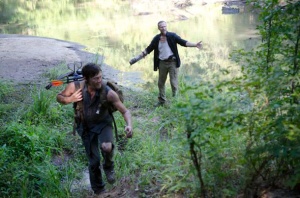 Rick’s little outbreak has thrown everyone off a bit and left the group without a leader, forcing Glen to take on the role and he is in no condition to be in that position.  Glen wants to go back to Woodbury and kill the Governor in his apartment and Michonne is all for that but the others, Hershel mostly, thinks they need to leave the prison and Woodbury behind. The Governor has the resources and the balls to attack them and the prison has been breached by walkers who are filling up the tombs again.  Their sanctuary is in jeopardy. But with his guilt and anger about Maggie, Glen is not thinking straight and wants revenge.  He finally asks her what the Governor did to her, not really knowing and she tells him that the Governor humiliated her, threatened to rape her, made her feel victimized and she is angry.  She tells Glen that she willingly took off her clothes to save him after listening to Merle beating him near to death.  Neither of them knows how to feel or what to do to get past the attacks on both of them.

Rick in the meantime has gone outside the prison fence and is kind of just wondering, following the vision of Lori around.  Michonne and everyone else are obviously concerned and have no idea what to do.  Carl is kind of just going on with life and he isn’t focused on too much in this episode.  Really, the whole group kind of just gives Rick room to be bat nuts (thanks for the phrase Lew Temple).  Hershel finally approaches him and Rick tells him about what he has been seeing.  Hershel is the ever understanding patriarch and tries to get Rick to go back to the prison but Rick can’t, not yet. 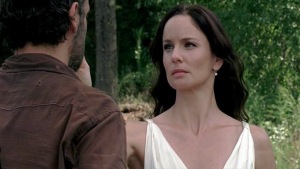 Carol and Axel are starting to form a new friendship with the absence of Daryl and things are going well as we get to know more about Axel.  Of course that is until the Governor shoots him in the head, spraying Carol with blood.  Milton lied!  The Governor wasn’t on a supply run at all, they went to the prison to shoot it up and give Rick’s group a show of force.  That was quite unexpected.  Then came the zombie bomb.  One of the Governor’s people drove a van through the prison gates and released walkers into the yard.  Rick seems to finally be out of his funk just in time to be surrounded by walkers but never fear, Daryl is back to save his ass along with Merle.  One thing I was kind of wondering about was what happened to the woman who drove the van with zombies into the prison?  I don’t recall seeing her after that and what sort of danger is the baby in?  I feel like there is something bad awaiting the child.

Final Thoughts: I feel like a hypocrite now, saying not much happened and then rambling on for so long.  This was a good episode for the Merle and Daryl dynamic and as pointed out on the Talking Dead, this is really the first time we see Michael Rooker and Norman Reedus working together.  They are both great actors and their interactions are so good. The Governor’s villainy is becoming clearer and clearer and this is more interesting than anything that is happening in Woodbury.  I’m not too sure I care for the Andrea story line but we’ll see how that progresses.  With Daryl and Merle at the prison and the Governor making his show of force, it will be interesting to see where the show goes from here.