The Walking Dead – I Ain’t A Judas

So what did you watch last night, The Walking Dead or the Oscars?  The correct answer is The Walking Dead.  Last week ended with some good action as the Governor shot off his guns at the prison to prove to Rick and the others that he is in control and he is not going to let them be.

Woodbury is preparing to go to war with the Governor getting Milton to prepare a list of all able-bodied citizens, young and old, being recruited to defend the town.  So he says but Andrea is beginning to get suspicious and worries that Phillip is just going to go on a murder spree and slaughter everyone in the prison.  Does this doubt, this fear of the man who is letting his true colours start to show deter her from him, from the comfort that he can give her?  Nope.  Andrea goes to the prison, against the Governor’s wishes but not without his knowledge.  Milton tells him that she is going and the Governor tells him to help her.  So she makes her own Walker pet and heads out.  While they are mutilating the Walker, Tyrese and the others show up and take Milton’s offer to go to Woodbury.  Once there they gladly join the Governor’s crusade to take down Rick.

Back to Andrea.  She arrives at the prison but not to open arms and quickly sees that Rick and the others are not the threat that the Governor is making them out to be.  Her reunion with Michonne is not a good one and it is clear that whatever friendship they had is done. Rick lets Andrea go back but Carol asks one thing of her first.  Give the Governor the greatest night of sex he has ever had, then kill him in his sleep.  She does the first but she cannot kill him. 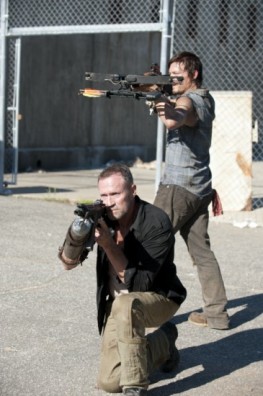 Final Thoughts: There wasn’t a lot happening in this episode other than Andrea’s conflict about the Governor and Tyrese’s arrival and new-found loyalty to the Governor.  There was a good moment between Rick and Carl in which the boy asks his father to step down as leader.  Rick seems to think it over but nothing really comes from it, not yet anyway. Merle is still being an ass and no one is too pleased to have him there but he is quickly proving that he can be a valuable asset and warrior for the shattered group.  We’ll see how things progress and what happens with the outing that Rick, Michonne and Carl head out on in the next episode.  We’ll see how the group in the prison does without Rick and Merle not being leashed by him.  Can Daryl keep control of his brother or it is really an issue.

This entry was posted on February 25, 2013 by Denise in Reviews, T.V. Reviews and tagged AMC, the Governor, The Walking Dead, walkers, Zombies.