The Walking Dead: 30 Days Without an Accident 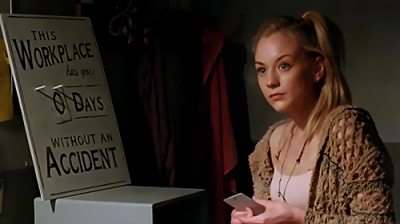 Finally, after many, many months of waiting, the Season 4 premiere of The Walking Dead has come and gone and it did not disappointment.

When the episode started out I feared that this season was just going to be tips on gardening during the zombie apocalypse featuring Rick Grimes but as much as Rick could use the mundane life, I don’t think that is happening.  Season 4 picks up about 6 months after the end of Season 3 and the population of the prison has increased with the Woodbury people and more survivors that Darryl is finding and bringing back to be apart of the new community.  We have a great scene near the beginning where a boy around Carl’s age named Patrick, thanks Mr. Dixon for saving him.  He is clearly uncomfortable with this but with Carol pushing him, he accepts it.  Carol then takes Darryl aside and points out how the Walkers are crowding the fence, not spread out or wandering anymore.  Odd.

Michonne returns to the prison after what I am guessing is another mission to try to locate The Governor; it is obvious that she is hellbent on finding and killing him.  Michonne and Rick seem to have developed a closer bond and Carl seems to be looking up to her more as well.  Pretty much immediately after Michonne’s return, she joins a group going on a supply run which includes Darryl, Glen, Tyreese, Sasha, Beth’s boyfriend Zach (played by Kyle Gallner) and new member of the prison, Bob (I don’t trust him).

The trip does not go well.  They head to a supermarket that was set-up as a camp when the outbreak happened but filled up with Walkers who remained trapped behind a fence.  Some of the group had previously scouted it, cut a hole in the fence and used a boombox to lure the Walkers out so the survivors could get inside and get supplies.  Smart move except for the dozen or so zombies and a downed helicopter on the roof of the store.  We find out Bob is a possibly reformed alcoholic when he takes a bottle of wine, looks at it lovingly, then puts it back on the shelf which subsequently falls on top of him and draws the attention of the Walkers on the roof.  Oops.  Then it begins to rain men (how many times has that been said since it aired) as the Walkers fall through the ceiling which was probably damaged from weather and the helicopter.  Things get messy but Bob is saved from being Walker chow.  Zach, however, is not so fortunate and now Beth needs a new boyfriend.  The title of this episode eludes to Beth keeping track of how many days the community has gone without suffering a lose; Zach is the first in 30 days. 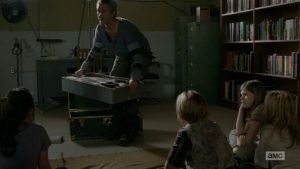 Storytime with Carol.  There are about 5 or 6 other kids at the prison ranging from ages of 6 up to the older Patrick.  Carol has been having a storytime for the kids, which Carl thinks is childish, but he soon finds out that she is actually teaching them weapons training and how to defend themselves in this horrifying new world. Carol asks Carl not to tell Rick and my question is why?  How else are they are going to survive.  Meanwhile out in the forest where Rick is gathering animals from traps, he has a disturbing encounter with a woman named Clara, who has been in a bad way for what looks like many, many months.  She looks like a Walker and probably smells like one.  She begs Rick to help her and her husband and he says needs to meet the husband and ask them 3 questions before he will let them into the prison.  Poor crazy Clara has kept the head of her hubby in a bag and had intended to attack and feed Rick to him.  Instead, she stabs herself in the stomach and asks Rick to let her come back so she can be like her husband and stay with him.  He leaves her there to return after asking the 3 questions.  The episode closes out with a whole new threat as young Patrick coughs into a barrel of shower water before collapsing, bleeding from his eyes and resurrecting as a Walker.  Shit is going to go down.  Earlier in the episode one of the pigs that the community is keeping for food and breeding was ill before dying mysteriously.  Could this have something to do with Patrick’s death?

Final Thoughts:  I was pleased with this premiere and I’m glad it picks up after a few months so we see how things have developed.  The foray to the supermarket had a lot of good and gory zombie splatting scenes and we see how emotionless sweet Beth is becoming after the death of her boyfriend.  Darryl is becoming a reluctant leader and Rick is being reluctantly pulled back into the fray after what I guess is an attempt to step back and protect and care for his children.  So what the hell happened to Patrick and who is feeding the Walkers rats to keep them at the prison fence?  I’m going to guess Patrick has some disease not connected to the zombie virus; Ebola or some other illness that no one is thinking could still present.  As for the preview of next week with someone feeding Walkers, who on the inside wants to destroy the community and survivors?  This looks like it’s going to be a good season.