Resurrection rites and deals with the devil, fertility spells with snakes and immortals seeking revenge; episode 2 brought all of these to life, so to speak.

We begin with gator poaching in the swamp that goes horribly wrong (not that there is anything right about shooting alligators in the head) when Misty Day shows up, not so burnt at the stake now, and revives the dead creatures to eat their killers.  They had it coming.

When last we saw Fiona she had dug up the very much alive and apparently immortal Madame LaLaurie from the garden of her former house.  Fiona has her bound and gagged and is in pursuit of the spell that has resulted in the sadistic woman’s immortality.  Her interrogation is interrupted by Cordelia asking Fiona to join her and the girls for a chat. 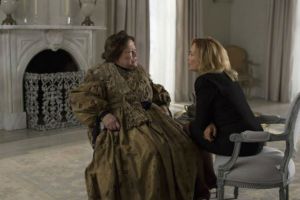 During girl chat, we get to find out how Queenie ended up in New Orléans at the school.  She boiled a man’s arm in hot grease by putting her own arm in the hot oil at a fast food joint she worked at.  Cordelia saw the story in a newspaper and brought Queenie to New Orléans.  Story time is quickly interrupted by the arrival of two cops asking to speak with Zoe and Madison about the bus crash outside the frat house.   Zoe cracks pretty damn quickly and tells them that Madison was raped and she flipped the bus using telekinesis.  Seriously, the girl totally lost it and said they were all witches.  Way to be discreet.  But don’t worry, even as Cordelia just sat there not doing anything, Fiona took care of the cops.  Not sure what kind of spell it was but she spit in water and forced the cops to drink it, erasing their memory of the visit and of Zoe and Madison.  Fiona then bitch slaps the pair for their inability to be discreet with their powers.

At this point Madison finds out that Zoe killed the ring leader of her gang rape and to pay her back, Madison steals a resurrection spell from Cordelia and they head to the morgue to bring back Kyle because Zoe won’t stop obsessing about him.  One little problem with that, the bus crash was apparently really brutal and the boys are, well, in pieces – Boy Parts – if you will.  Madison decides to pick the best parts and attach them to the Kyle’s head.  Frankenstein!   The spell, in which they pledge their souls to the devil, doesn’t seem to work at first but when it does, Kyle is not doing so well.  He is a reanimated corpse, unable to control his body and is rather violent.  Luckily for Zoe, Misty Day was attracted to the magic and is there to help Kyle heal and really wants Zoe to be her new best friend.

Not much else is happening with the girls but we do get to see Nan get pissed off with the tied up Madame LaLaurie’s talking so she lets her go.  Backtrack.  Prior to Nan’s liberation, Fiona was able to find out how LaLaurie achieved her immortality:  Marie Laveau of course.   The potion that the voodoo queen gave her was not a love spell but rather an immortality elixir.  Gift or curse?  Marie tortured and hung LaLaurie’s family in the street before boxing her up and leaving her buried for eternity or until Fiona dug her up.  So what does Fiona do?  Goes and finds Marie Laveau to try to persuade her to give up the spell for immortality.  Yes, Marie is still alive and working out of her hair salon in New Orléans.   Oh and she still has the Minotaur who is ready to find LaLaurie. 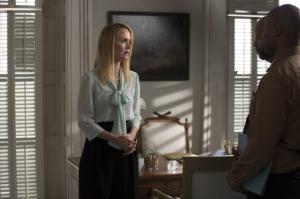 Zoe and Madison are raising the dead, Fiona is negotiating with a legend, and a supposedly dead woman is tied up in the school.  Where is Cordelia?  Using black magic to make herself fertile and having sex with her husband in a circle of fire and snakes in the hopes of conceiving.  That’s a responsible role model, right?

Final Thoughts: This was a pretty good episode giving the scoop on Marie Laveau and Madame LaLaurie and also showing how Queenie ended up in New Orléans.  I was wondering how Kyle and Misty Day were going to come back into it and I have to say, I didn’t see the Frankenstein bit happening.  Misty Day is a bit of an odd one but I guess you would be if you were able to resurrect the dead and were burnt alive.  I like the way, so far, that the show is not diverging between too many different stories like in Asylum.  Yes there is Zoe and Kyle and Misty Day off to the side but they are still connected with the school and the other characters coherently.  This is also true for the Madame LaLaurie,  Marie Laveau and Fiona Goode triad.  It all fits together.  Good episode with plenty of bloody bits thrown in.