In My Time of Dying (S2, E1): At the end of Season 1, our boys were looking pretty bad after being side swiped by a truck.  Season 2 picks up with the men being airlifted to the hospital.  John and Sam have made it out with minor injuries but Dean is in a coma an it’s not looking good.  While John and Sam fight (as usual) about finding a way to save him, Dean is wandering around on the other side of the veil with a woman who is also close death.  We soon find out that she is a reaper, come to take Dean’s soul and put him to rest.  But John has a plan to save his son; he summons Yellow Eyes and trades the Colt and his life/soul for Dean’s life.

Why it’s good:  The exit of Jeffrey Dean Morgan and the death of John Winchester to save his boy and let the demon that destroyed his life, killed his wife and cursed his boys, go.  Enough said.

Everybody Loves a Clown (S2, E2):  Sam, the big bad hunter is scared of clowns; really who isn’t.  Following the death of John, the boys are coping poorly and head out on a job following a call from a mysterious woman named Ellen.  Enter mother and daughter hunters, Ellen and Jo Harvelle.  Sam and Dean take care of the killer clown but the interesting parts of this episode are the introduction of the Harvelle’s and their bar that caters to hunters and we meet the computer genius, Ash.

Why it’s good: The introduction of more hunters for one and watching the boys cope or try to cope while continuing on with their lives after the death of their father. 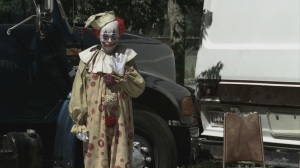 Crossroad Blues (S2, E8): Here we have the introduction of the crossroads demons.  Dean & Sam discover that several mysterious deaths are linked to a bar at a crossroads and the victims all found sudden success 10 years earlier.  Now they are all seeing black dogs and are dropping like flies.

Why it’s good: Well, the introduction of the crossroads demons who play a pivotal role in the lives of the Winchesters from this season on.

All Hell Breaks Loose Pt. 1 (S2, E21): Sam walks into a cafe one night and doesn’t come out.  He has been somehow transported to a ghost town with the other kids like him; infected with the Yellow Eyed demon’s blood.  There are 4 others including Andy and Ava from earlier episodes, and military man Jake and a distraught woman Lily.  The demon has gathered them there to see who is strong enough to survive and to kill to become Yellow Eyes leader in his army of hellions.

Why it’s good: This is the first time we see one of the Winchester boys actually dead for more than a few minutes, aside from John of course, and we get more insight about why Yellow Eyes is infecting babies.

All Hell Breaks Loose Pt.2 (S2, E22): Sam is dead and Dean is suffering.  So what does he do to handle the loss of his baby brother…sell his soul to the crossroads demon to bring him back.  Dean is left with 1 year to live before the hounds will drag him to hell.  With Sam back and with the help of Bobby and Ellen, the group tracks down Jake but are unable to stop him from opening a gate to hell and releasing a legion of demons.  Yellow Eyes shows up and John crawls from hell to help Dean kill him once and for all.

Why it’s good: Sam coming back from the dead and killing the shit out of Jake; John coming back to help his sons’ and finish off the demon; Dean selling his soul and damning himself to hell to save his brother.

And here’s a little something extra in honour of the Crossroad Blues episode.

This entry was posted on May 28, 2013 by Denise in Reviews, Supernatural and tagged Crossroad Blues Robert Johnson, Supernatural.