The Gist: Kirk, Spock, Bones and the rest of the crew of the Starship Enterprise are back for more action and illogical adventures in the follow-up to the 2009 re-imagining of Star Trek. This time around we get a new bad guy, Khan, and the first look at Klingons. 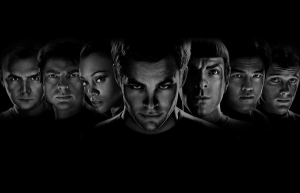 My Take: This was a highly enjoyable movie and  puts the original 1982 Star Trek sequel to shame.  I know, sacrilege but hey, Benedict Cumberbatch makes a far better Khan than Ricardo Montalban.  And how can you not like a 3D Karl Urban running right at you.  So we open with a spectacular scene filled with colour and action as Kirk, Bones and Spock upset the balance of a humble primitive culture and interfere with the natural order of the planet by preventing a disaster.  Kirk doesn’t get away with his antics and is disciplined but that doesn’t last long as Khan makes a mess of the elite Star Fleet rulers and incurs Kirk’s wrath.  Spock is his usually logical self missing the intricacy of human emotion but Uhura is there to help thaw his Vulcan blood.  We have Scotty standing up to Kirk and showing his heroic side and we get a new piece of eye candy with Dr. Carol Marcus joining the crew.

The story for this flick was alright, it had some twists but was overall predictable yet enjoyable.  The effects were amazing (no big surprise) and as this was the first time I’ve seen a movie in Imax 3D, I was really impressed and amazed by the effect of having little bits of dust and debris or ash falling all around.  Very cool.  For me though, the best part was Benedict Cumberbatch but it sort of felt like he wasn’t really featured as much as you would think for being Khan. 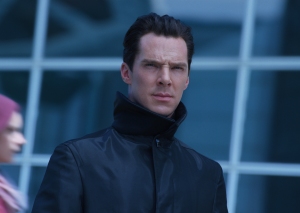 Final Thoughts: This was a fun movie with characters that are familiar and enjoyable to watch.  The villainous Khan was brilliantly played by Sherlock Holmes and the Imax 3D experience was fricken’ cool.  Defiantly worth seeing on the big screen.

This entry was posted on May 25, 2013 by Denise in Movie Reviews, Reviews and tagged Benedict Cumberbatch, Karl Urban, Spock, Star Trek, Zachary Quinto.