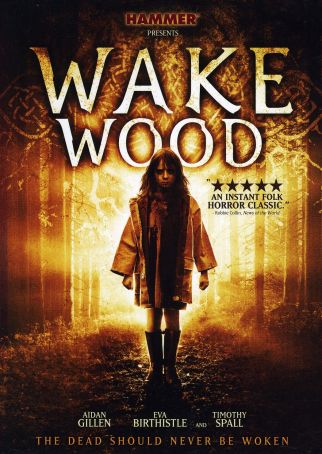 The Gist: Trying to rebuild their lives and marriage following the brutal death of their young daughter, Patrick and Louise move to the small rural community of Wake Wood in search of peace.  Their search is turned upside when a dark secret that the town holds comes to their attention and their lives are changed forever. 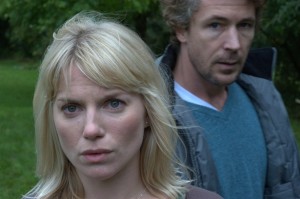 My Take:  How does a husband and wife, mother and father deal with the traumatic lose of a child?  I can’t even imagine it.  The movie starts out with the happy family enjoying daughter Alice’s birthday.  The day takes a grim turn when Alice decides to feed a dog that dad Patrick has been caring for at his vet practice attached to the house.  She is torn up and left bleeding and dying as the couple races to the hospital too late.  The scene of Alice screaming and bloody and the dog tearing at her flesh is not graphic but is still quite brutal.

Cut to a year or so later – maybe more, maybe less – and Patrick and Louise have settled in Wake Wood.  Patrick is working for a vet who is no longer actively practicing and Louise has taken over the pharmacy but their relationship is splintered and it’s evident that it is on the verge of breaking. On their way into town one night their car breaks down near Patrick’s bosses home, Arthur, and they try to raise him for help.  No one answers, so Louise looks around and finds Arthur and a group of the townsfolk in back of the house and there is some strange shit going on.  There is chanting and fire and some guy just slithered out of a bizarre burnt form; slithered and is covered in some kind of slimy bloody essence.  Louise is stunned and grabs Patrick and they walk back to their house only to find Arthur sitting in their living room.  More weirdness. 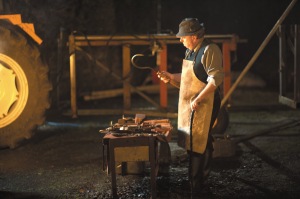 Louise soon finds out that the residents of Wake Wood, Arthur in particular, have the ability to bring back the dead but only for 3 days.  Something about preserving freshness.  This is one last chance for those grieving to say a proper good-bye.  Seems kind of cruel and more painful to have a short time together and that the dead don’t know they are dead.  Arthur offers this opportunity to the couple who are still grieving the loss of Alice but there are rules.  The deceased cannot be dead for more than 1 year and the resurrected cannot leave Wake Wood during their brief stay on earth.  Also, by performing this ritual it will bind the couple to Wake Wood and they cannot leave.  Patrick and Louise go ahead but keep the truth about Alice’s date of death a secret because they are desperate to see her again.

The ritual is set to take place but first they need a fresh corpse, which they have, and the permission of the deceased loved ones to use the body.  The widow of the poor dead man reluctantly agrees but knows that something isn’t right with Patrick and Louise.  The act of resurrection takes place and Alice is reborn but soon enough everyone realizes that she isn’t right or as right as a dead child given a second life can be.

Well, going on a murderous rampage is defiantly out of the norm, which is what Alice ends up doing.  And the reason that she has come back as a killer is because she has been dead for over a year.  Louise and Patrick know that they need to stop her and get her back in the ground and to do this, Louise lures the tiny killer outside the border of Wake Wood which causes her to die the same gruesome death all over again.  If that isn’t tragic enough, the consequence to their deception is Louise being dragged down into the grave with Alice and presumably dying. 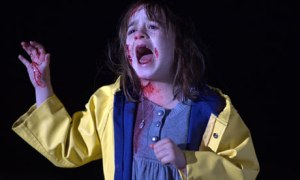 Here’s the thing about the end.  Patrick has Arthur do the ritual again to bring back Louise who is clearly at full term pregnancy.  The last shot shows him waiting for her with an array of surgical tools on the bed side.  This is what I don’t get – what is he planning to do.  Take the baby and hope it lives and is normal?  Take the child and Louise out of Wake Wood if possible?  And where the hell are they getting all these bodies to keep performing the ritual?  I’m confused but maybe I’m just reading too much into it.

Yah or Nah: I’m torn on this one because there are things that I like and didn’t like.  The story was interesting but it left me wanting more; more details on the ritual and more of a resolution.  I guess more of an expansion on the story in general.  So while this is a Yah, I wanted the end to be more coherent and not leave me with questions.  I’m sure it’s just me for missing something but I didn’t get the meaning of the ending.  And on one last note, the young actress who played Alice was very, very good in this role.