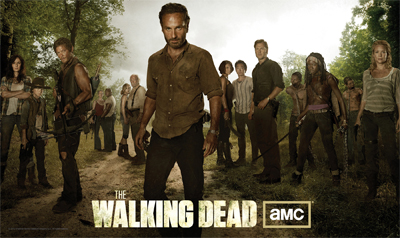 Normally I wouldn’t write about The Walking Dead but after the first 2 episodes of the third season, I’ve decided to do it.  First off, some comments about Season 1 & 2.

Season 1 – The first episode, Days Gone By, was amazing. The introduction to the zombie apocalypse and the world of TWD was powerful, sad and gruesome as the viewer followed Rick Grimes from waking in an abandoned (except for the walkers of course) hospital and following him to Atlanta, surrounded by the walkers and trapped in a tank.  This was a short season, with only 6 episodes and some of them seemed to waste the premium amount of time that they had. But all in all, it was good and worth watching.

Season 2 – After the good start to the series in Season 1, my expectations for the Season 2 were high and boy, were those hopes dashed quickly.  They spend half the season looking for Sophia and the entire season on the farm and telling Carl to stay in the house, which he never does.  And don’t even get me started on Laurie.  I dislike her character immensely and Rick was still pussy whipped up until the end of the season.  The last couple of episodes were the best of the season and you could really skip all the others and not miss too much.

And now Season 3 has started and I’m already more impressed with this one, than with the entire second season.  It starts about 10 months after the outbreak; this is just a guess as they haven’t really said how long it has been but winter has come and gone and Laurie is overdue to give birth to Shane or Rick’s baby.

Seed: The group has traveled around trying to find a safe place while avoiding the walker herds.  For the first 10ish minutes no one says a word as the group finally makes it to the outside of the prison. The survivors are looking pretty ragged at this point and once they start interacting, there are noticeable differences in the characters.  The relationship between Rick and Laurie is clearly strained as he avoids her and is cold when he does speak to her.  After Laurie’s outburst about Rick killing Shane, Rick is done with her.  Carl is also angry with his Mother and is just as curt with her. Whereas Rick and Laurie are broken, Daryl and Carol seem to have grown closer and their relationship stronger.  Rick has definitely taken on the leadership role and everyone else has accepted this and fallen into line.  The rest of the episode shows the group making their way into prison and clearing out the walkers that block the way. We only get a brief encounter with Andrea and Michonne as Andrea lies sick and feverish and Michonne tries to keep her spirits up and her will to survive alive.

Sick:  Episode 2 picks up with Rick hacking off Hershel’s leg after he is bitten by a walker.  While this is happening, a group of prisoners watches. The prisoners have been locked in the cafeteria for about 10 months and have no idea what’s been happening on the outside.  You can immediately see that there is going to be conflict between Rick and the quasi head of the prisoners group, Tomas. Rick and his peeps decide that they will help clear out a cell block for the prisoners to stay in but they have to stay away from Rick’s people.  Rick, T-Dog and Daryl go with the 5 prisoners into the closed parts of the prison and things go poorly.  Who knew.  They encounter walkers and Tomas makes a big mistake when he pushes one into Rick.  That’s the end of Tomas as Rick takes his revenge with a machete to Tomas’ head.  It was pretty unexpected but he had no choice because Tomas was going to be a problem.  One of the other prisoners runs off and Rick locks him in a courtyard to be eaten by walkers.  Brutal. The episode ends with a nearly one-sided conversation between Rick and Laurie which basically ends their marriage.

Final Thoughts: The 2 episodes were more action packed and just more interesting as some the group simultaneously evolves and devolves; Rick and Laurie’s troubles, Hershel’s brush with death and the encounter with the prisoners.  Judging from the previews for episode 3, it looks like we are finally going to get to see the Governor and we’ll see the return of Merle Dixon. One of the things that I like more is Rick’s dominance and shunning of Laurie.  I mean come on, she goaded him into killing Shane then got pissed off at him when he did.  I also like the way that Carl has changed and has adapted to the new world.  He is turning into a little bad-ass and he is a wicked shot with that hand cannon he uses.