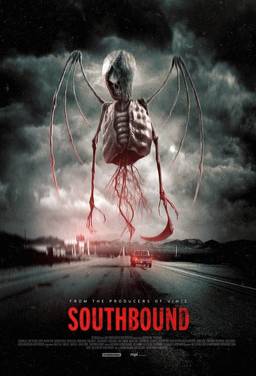 Southbound takes a trip down a lonely desert highway where winged skeletal creatures hover in the distance, watching and waiting. The flick is a horror anthology that uses that lonely highway to tie together 5 stories where the beginning is end and the end is the beginning…that does eventually make sense. But not all the stories in the movie do. Here is brief synopsis each segment with no spoilers (at least nothing obvious).

The first segment starts with 2 men driving down the highway covered in blood and bewildered, the floating creatures seemingly tracking them. Arriving at a diner, they fall into some sort of time loop but escape is impossible. 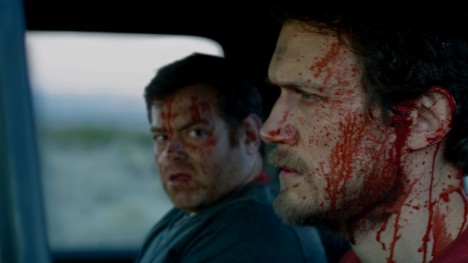 Up next are 3 young women on their way to a gig when they get a flat tire on the highway but eventually a kind middle-aged couple shows up and suggests the women go home with them where they will be able to get help with their van in the morning. One of the women is hesitant but the others are eager to get off the road. What follows is a dinner that no one in their right mind would touch followed by some lovely black vomit. Hesitant girl doesn’t trust the couple and their creepy neighbours and with good reason. 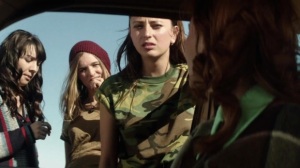 The second tale flows into the third as a man on his cell phone driving down the nighttime highway runs over a woman in the middle of the road. Seeking help from 911 is not a good idea in this instance and the situation devolves as the man enters a deserted town and an empty hospital in disarray. This segment was pretty gory and unnerving as the man tries to save the woman.

Again, there is a flow from the previous tale into the 4th one as we stay in the deserted town and head to a bar where a man is looking for his sister but in his pursuit to save her from the town she is voluntarily in (is it hell?) he takes her away against her will and pays the price for trying to be a good brother. This is the one that is somewhat muddy but that could have been from the beer. 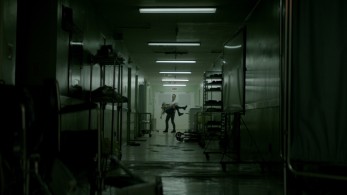 And finally to wrap it up and bring the movie full circle, a couple and their college bound daughter have rented a room at a roadside inn next to the highway. They are the perfect loving family until masked men start an assault on their room, terrorizing them. But there is a reason that isn’t made quite clear. The husband has done something unforgivable to one of the men however, it’s also muddy as to whether or not the viewer is supposed to infer what he did or if they actually say it (beer bad, when watching movies). This is where the first story ties into the last one but you’ll have to watch it to understand.

Final Thoughts: This was an OK horror anthology. Using the highway as the connection between tales worked but there was a bit of a feeling of being lost as to what was going on with each segment. The third tale was felt the most complete and was enjoyable because of that. The creatures were interesting too and certainly got creepier by the last story. All in all, a decent flick with some weirdness and winged baddies. 3 winged demons out of 5. 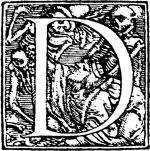 This entry was posted on October 17, 2016 by Denise in 31 Days of Halloween, Movie Reviews, Reviews and tagged Demons, hell, horror anthology, Southbound.