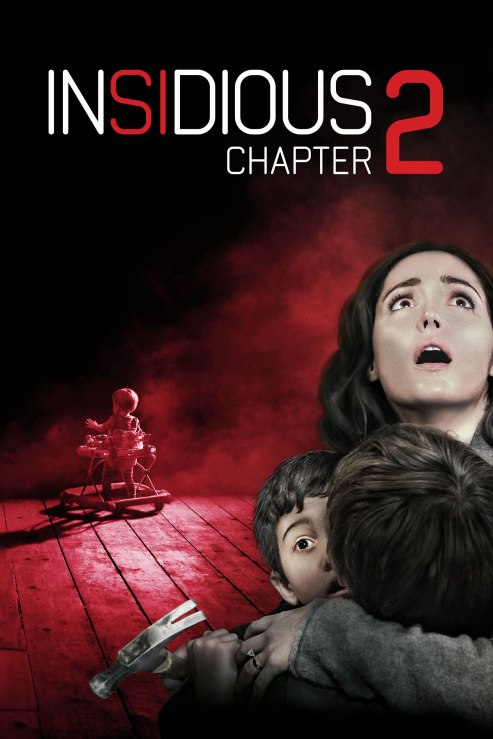 The haunted Lambert family seeks to uncover the mysterious childhood secret that has left them dangerously connected to the spirit world. (IMDB)

The Gist: The flick begins by taking us back to 1986 when Josh Lambert’s mother Lorraine first seeks the help of ghost hunters and medians, Elise and Carl to try to help the haunted boy.  The only solution they can come up with is to erase his memory of the supernatural events including his ability to “travel” into the further while he sleeps.  From there we jump to the present and the flick takes off immediately after the events of ‘Insidious’ as the Lambert family heads to Josh’s childhood home to stay with his mother.  While all seems to be going back to normal it’s not long before they realize that they are still living in the nightmare of ghosts and the hungry dead.

Insidious Chapter 2 continues the haunting of the Lambert family but delves into Josh’s childhood and the origins of who and what has attached itself to him and his family.  We see the return of Specs and Tucker to continue helping the Lambert’s now that Elise is gone along with Carl who helped Elise all of those years ago when Josh first experienced the haunting. And what of the origins of those ghosts?  Well, it is kind of interesting as well as sad and disturbing but it does serve to tie everything together for a complete story, making me wonder why is there a third flick in the works.

Final Thoughts: So what’s the verdict on this flick…it was ok but certainly not great.  I would recommend it if you’ve seen the first one and liked it and want to know how the story of Josh Lambert’s abilities began and how his and his family’s story progresses.  There were a couple of good scares and Patrick Wilson was good as he suffered from the continued haunting.  Overall, a good-looking movie, a good cast but defiantly lacking real thrills and chills.  As for what the next movie has in store, I’m thinking it will be a departure from the Lambert family and focus on Specs and Carl doing their own version of ghost hunting.  Maybe this is a tale that should end at Chapter 2.

This entry was posted on April 23, 2014 by Denise in Movie Reviews, Reviews and tagged featured, ghost hunter, Ghosts, Insidious.