The sky brightened as I continued down the unobstructed road.  My eyes started to droop in the calm of the dawning morning and I was dangerously close to falling asleep at the wheel and probably would have if it weren’t for the sudden eruption of civilization appearing after 20 minutes of peaceful driving.  In the lane coming from the opposite direction, there were cars, dozens of cars, stopped and waiting to turn off to the crossing into Canada.  At first it was the sudden sight of people and vehicles that surprised me but soon it was the noise after the quiet of the road that shocked and awakened my senses.  I stopped a few feet from where the lanes going south and north merged and turned west to the border.

Horns honked to no avail other than to make noise and that racket wasn’t going to get them any closer to the border, neither would the people walking around the cars and shouting at no one in particular.  I had a flashback to the roadblock near Holly’s cabin and the carnage that we had encountered in a situation similar to this one.  All of these people deadlocked and unaware of the potential danger that could be lurking in the forest surrounding us.  The noise was going to be a problem.  I couldn’t help but believe that whatever was reviving the dead had continued to spread and may have made it this far.

Would crossing the border make a difference and was it even possible?  There were probably a dozen places running along the divide between the US and Canada that weren’t monitored and even if they were, the guards wouldn’t know what was happening. Going back the way I came wasn’t an option, continuing north might be an option but I didn’t know where the other bases were that Keenan had mentioned, so I had no real choice but to turn toward the border.  It took me a minute of assessing the options to come to the realization about what was wrong with the situation.  The traffic.  Why was there so much traffic coming from the other direction.  There were no major holidays that would cause people to be trekking one way or the other and from what I could see, the line coming into Washington was nearly non-existent.  Something was pushing all of those people toward the border and I only knew of one threat that could explain it.

Left to Canada or straight to what may lie ahead.  The border was going to be difficult to cross especially if some sort of panic were to happen.  The forest was thick in spots and I was certain there must be somewhere, deep through the woods, where I could make the crossing without encountering anyone.  The real concern was the Shamblers if there were any in the forest.  I put the truck in drive and continued straight just past the intersection, stopping near the turn off where a man was smoking and pacing beside his parked mustang.

“Hey man, what’s going on, why is there so much traffic heading to the border?”

I tried to keep my tone light but I undoubtedly looked like shit and didn’t really care if any blood showed on my clothes.  The smoker gave me a once over, his face briefly registered alarmed then returned to frustration as he responded.

“Quarantine is going into effect for most of the county.”

I didn’t have anything to say to that.  Clearly the virus was spreading but if there was a quarantine looming, how did these people get here?  Surely there were roadblocks to prevent citizens from leaving a potentially hazardous zone and why the hell did they think they would be allowed across the border if quarantine measures were being put into effect?  I could have asked the smoker but he didn’t look like he wanted to chat and he wasn’t exactly giving off vibes of being a fount of knowledge.  I left the man pacing, tapped my fingers on the steering wheel considering options, and then continued down the road. I moved past the long line of cars that went on for 5 miles and continued moving, not joining the others trying to flee the country and the virus.  I didn’t have high hopes that Canada was going to let in an onslaught of Americans trying to avoid quarantine.

I found what I was looking for 15 minutes later by way of a rest stop.  There were a few cars with people milling about and using the restrooms.  I pulled in the farthest from the bathroom and the others cars, cut the engine and took a moment to try to formulate a plan.  Up to this point thinking clearly and planning hadn’t really been an option between the people I was with and the situation in general.  Here was a chance to stop and plan my next move without others interfering or the threat of being attacked by Shamblers. The only problem was I wasn’t sure what to do because I had no idea where the hell I was or where I could go from here.

I opened the door to get out then looked around the truck cab and at myself.  Both were a mess.  I put the weapons I had taken from Keenan on the floor then threw all the bags on top to cover the scattered bullets and guns.  The man, the smoker, I had talked to may have seen my arsenal…I didn’t have the luxury of caring, besides, he seemed more worried about getting out of the country.  The weapons were hidden well enough, me however, I didn’t know exactly what I could do to clean myself up in the truck.  The blood from Scott had dried into a flaky brown mess on my hands and could easily be mistaken for dirt since the rest of me was absolutely filthy.  I figured if my appearance didn’t deter people from talking to me than the smell of me surely would.

I stepped out of the truck and surveyed the surrounding area.  The highway was on one side and there was nothing but forest in front of me.  How dense were the woods, how far was it to Canada from here, could I really pull it off, could I really walk the-

“Hey mister, are you a soldier or something?”  A boy of 6 or 7 interrupted my thoughts.

The natural curiosity of children.  I would rather have faced a zombie. 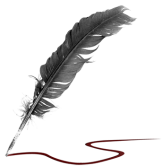 This entry was posted on January 24, 2014 by Denise in Writing and tagged A Good Soldier, Shamblers, Zombies.