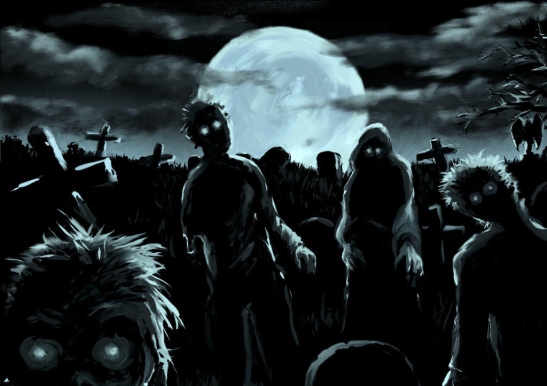 “Langley, can you get the shutter up?”

I stuffed a couple of the handguns, a shotgun, rifle, both grenades and a good portion of the ammo into a duffel and took no notice of the fact that Langley hadn’t moved. Shit.  He seemed to have shut down to block out what had and was still happening.   Meredith was in the same state and the boys just stood crowded around the window looking at the monsters from fiction, not sure what to do.

Time was becoming of the essence.  The incident with Hank would bring the Shamblers toward the police station and it was only a matter of time before they figured out, on purpose or by accident, how to get inside.  I finished scamming weapons and ammo and tossed the sealed bag at the shutter then went to Langley.  I tried to be nice for about 2 seconds, asking him if he was alright and could get up and get out here.  He still didn’t answer.  I looked at the college kids and Meredith.  They surely already thought I was the monster in this scenario and considering what I was planning to do, they wouldn’t be far off the mark.  Fuck it.  I pulled Langley clumsily to his feet, I may have been taller but the cop had a more solid build, which didn’t deter me from slapping him.  Assaulting a police officer?  Might have been but given the circumstances it seemed irrelevant and besides, it worked.  Langley blinked then pushed me back cursing that he could get the goddamn fucking shutter up but he wasn’t going down those fucking stairs first.

“Fine, just open it so we can get out here before Hank- before more Shamblers are drawn to the outside stairs.”  I waited at the shutter with my bag of weapons gripped tightly.  “Meredith let’s go, guys come on.  I’ll go down first, stay close and be ready to run for my truck.”  No one asked why my truck and I was grateful to not get in a pissing match about the method of our planned escape.

The guys moved behind me following orders without question and Langley stood to the right, his hand poised over the button that would open the barrier.  Meredith stood back from us, pale, her face wet with tears and her eyes huge with shock and fear.  I didn’t ask if she was ok or ready to do this; she had to be or she would be left behind.  I had to focus now and try to prepare for what could be waiting below.

Langley punched the button and I waited, cringing as the metal shutter shook and a metallic clanging sounded as the barrier made its way up for 15 painful seconds.  I never realized how noisy the world was until being quiet became imperative.  I headed down the first flight of stairs slowly, stopping to peak around the corner and saw nothing.  I continued down the steps to the main level and still saw no movement, then froze when I finally had a view of the street.  There was a good scattering of Shamblers on the street but they didn’t seem to be attracted to the light of the police station or have any interest in getting inside.  I walked halfway back up the steps where the others were waiting for my signal to move forward and told them what I saw.

“Do you think we can make to your truck?”  Connor tapped his gun against his leg, his nerves clearly on edge.

“We can make.”  I patted him on the shoulder to reinforce a confidence that I didn’t really have and cover up what I really wanted to say.  I can make it because I know exactly where I’m going.  The rest of you either keep up or fall behind and stay behind.  I smiled reassuringly then motioned for them to follow.

To say I felt vulnerable would be an understatement.  Even though the Shamblers didn’t appear to see or be interested in us, facing a wall of windows and seeing them in their gory reality was unnerving.  I moved slowly through the desks hoping the others would follow and be just as mindful about not making any noise.  I reached the double doors after a slow 5 minute walk across the office and stopped to assess the zombie situation.  There were still about 4 Shamblers chewing on Holly and I could see at least 2 more by the corner where Hank had died but there could have been more out of view on the stairs.  A large group had gathered around the car stuck halfway out of the ruined diner window.  It was the other dozen wandering aimlessly that put me on edge.  They didn’t seem attracted to the fresh death or the light of the station even though they moved in circles about 10 feet from the glass.  I couldn’t understand why they didn’t approach it like moths to light but I didn’t have time to question the behaviour of monsters.  As long as they kept that distance and we remained as quiet as possible, I could make a clear line for the truck and worry about their attack patterns after I was heading out-of-town.

I pushed the door and my heart dropped at the squeak of rusty hinges cutting through the otherwise quiet night.  I cursed for not noticing it when we came in but didn’t waste time lamenting as the heads of 3 Shamblers whipped to face me.  I waited for about 3 seconds then started to run, trying to ignore the curses of fear coming from behind me.   The 3 zombies that had turned seemed to be the most cognitive of the group and moved far too quickly, for dead people, in my direction.  The others that had been meandering moved, slower but fast enough, creating a barrier and separating me, Scott and Langley from Meredith, Connor and Brian; I had the fodder I needed to make my escape.

Meredith started to scream as I nearly dodged the hand of a zombie that had been eating Holly when the others started yelling and brought the attention of the Shamblers to us.  The monster’s long nails managed to scrap a bloody line done the back of my hand but I didn’t have time to think about the implications of this diseased creature scratching and possibly infecting me.  I also didn’t stop or turn back to Meredith as her screams became more frantic and the others calls for help turned to shrieks of pain.  I shot 2 of the Shamblers that approached the truck just as I was about to open the door; the eruption of the gunshots drawing more and more in my direction.

“Hurry up, get in and let’s get the fuck out of here!”

Langley was already in the passenger seat and aiming at an approaching Shambler on the right.  The gun exploded as I turned the ignition and put the truck in drive.  He fired 2 more shots and I had a moment to look behind me and see the remains of Meredith, Connor and Brian twitching under the feeding mouths and hands of the zombies.  Scott was dodging Shamblers and desperately trying to reach the truck.  I kept my foot on the break even as Langley yelled for me to go.

“Son of a bitch.”  I popped into reverse and gunned the engine swerving and trying to line up with Scott while trying to keep up my speed and keep the Shamblers off the truck.

The truck jolted and stopped as a Shambler that once had been a middle-aged man and weighed a good 300 pounds, impacted with us and got its heft lodged under the back wheel.  I hadn’t been going fast enough to completely run over the heavy man and while it wasn’t my intention to immobilize, Scott was able to jump on the bumper and fell onto the flat-bed with 3 zombies on his ass, scrambling and struggling to get in the truck.

“Go!”  Scott was clinging to the back window slamming his hand as hard as he could against it to make me move.

I put the truck in drive and pushed the gas pedal slowly but forcefully.  Nothing happened at first but I felt the back wheel start to give way as the tire lodged on the zombie’s belly cut through the fat and muscle.  I looked behind me in horror at the flying flesh and spraying blood.  Scott had curled up, covering his face from the gore, still pressed to the cab of the truck.  If I didn’t get out of there quickly, he was going to be dragged out by the Shamblers.  I pushed down harder on the gas and the last of the flesh and bone tore away just as a zombie made it halfway into the truck, snapping and clawing at Scott.  I jerked to the left and the creature flew off.  I kept the gas pedal pushed to the floor and picked up enough speed to plow through a half a dozen Shamblers before making it past the police station and hitting the highway.  I looked back and almost lost control of the truck as a swarm of nearly 50 Shamblers were moving toward the cop shop and the highway in pursuit of us.

The town was lost.  Six more civilians were dead, 3 of them probably turned already.  Scott cried from behind the glass, still curled on the floor and Langley silently reloaded his gun. I had made the escape as planned and let others die in order to facilitate that escape, as planned but I wore the burden of their deaths like an iron weight on my heart.  I could have helped them, I wanted to help them.  Even now their screams still echo in my ears as a guilty reminder of the heartless prick I have had to become.  But on that night 6 months ago, I kept my eyes on the road and let the tears fall freely from my eyes.

This entry was posted on November 5, 2013 by Denise in Writing and tagged A Good Soldier, Shambler, Zombie.