Walkers inside the prison provide a rude awakening, farmer Rick tosses down the gloves and I loveded you piggy, I loveded you!!! (Gir from Invader Zim).

Before I get into Episode 2, I just want to acknowledge that this is my 200th post.  200 pieces of writing put out into the world, for better or worse, and that is quite an accomplishment for me.  Thank you for hanging around and I hope to keep the work flowing.  Now back to The Walking Dead.

Young Patrick is back from the dead after dying from a mysterious illness that appears to be a super flu or perhaps a strain or mutation of the swine flu.  He moans and groans his way to a deep sleeper who doesn’t hear the heavy breathing or shuffling and ends up with a torn out throat.  Patrick then proceeds to tear open his stomach and dig out his innards then has a seat and chows down.  It was pretty gross.  Thus begins an outbreak and about 15 people die during the chaos. 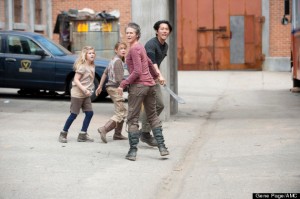 One of the people who died had two daughters, not sure their ages probably about 9 and 11 but before the man succumbs to his wounds, he asks Carol to take care of the girls.  She now has 2 Sophia’s and is not the timid worrisome Mother anymore.  She tells the older girl to toughen up and stop being weak.  She has to be able to kill Walkers, not treat them like pets, if she is going to survive.  I don’t know, even though the girl seems to take Carol’s speech to heart and accept what she is being told, I feel that the kid is just angry and messed up and a potential problem with her Walker sympathizing. 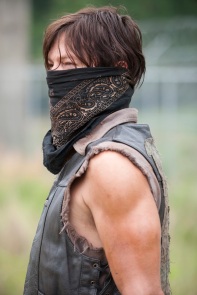 After the outbreak, it is determined that Patrick died of a virus and the group must figure out what kind and what to do with those who may have been exposed.  Quick note: Patrick along with some of the Walkers at the fence had trails of blood from their eyes indicating that they died of a virus not from injury and this clearly identifies a new threat.  Scary and very interesting.  Only 2 people are showing symptoms of illness and they are quickly quarantined on death row.  One of the sickies is Tyreeses’ woman Karen, the other is some red shirt.  Of course Tyreese is not impressed that his lady is being segregated but he lets it go and decides to pick her some flowers to brighten up death row.  Oh shit.  Karen and the red shirt aren’t in their cells and there are blood trails leading to the yard outside, where Tyreese finds their still smoking and burnt bodies.  Tyreese is going to go off the rails but who did it?  Clearly it was done as a form of containment against the flu, if that is possible but damn, that’s harsh.  I think it was Bob the alcoholic from episode 1; the fellow that got stuck under a shelf in the grocery store. Why?  Because he seemed very concerned about the flu and what they were going to do about it, more so than the others.

When the outbreak happened Michonne was on her way out of the prison but quickly turned back to help only to twist her ankle and nearly get eaten by Walkers.  Maggie helped her up and Carl used a rifle to kill one of the Walkers; something that he seems deeply ashamed of when he later confesses to Rick that he used a firearm.  Beth bandages up Michonne, who then goes into a weird funk as baby Judith starts crying.  Later, Beth asks her to take Judith so she can clean up some baby puke and Michonne refuses, turning her head from the baby but eventually gives in.  She holds Judith away but soon looks at the child then holds her close and starts crying.

And finally Rick.  This episode is quite hard on him as he is being drawn back into a leadership role.  He has to kill some of the people who are killed during Patrick’s reign of terror before they turn and to add to the trouble inside the prison, the outer defences are coming down.  With someone feeding the Walkers rats, the creatures have been congregating heavily on certain areas of the fence, causing too much pressure and it is now collapsing, threatening their safety.  Rick comes up with a plan that devastates him and forces him to acknowledge that he must abandon the farm life, abandon his pacifism and accept that killing is a part of everyday life now.  Rick grabs the remaining 3 piglets and he and Darryl head out to the other side of the fence.  Rick proceeds to cut the piglets and leave a trail of squealing pigs to draw the Walkers from the fence so it can be reinforced.  Rick is angry, sad and discouraged after the day’s events.  He seems to have lost all hope of any type of normal life; not that I’m sure he had any real hope to begin with.  And finally, Carl gets his gun back and Rick straps his on.  The Sheriff has returned.

This entry was posted on October 21, 2013 by Denise in Reviews, T.V. Reviews and tagged Rick Grimes, The Walking Dead, walkers, Zombies.