A double suck fest…ummm….in the words of Sterling Archer 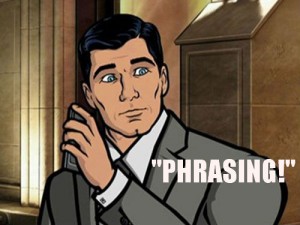 This is what, number 5 or 6 in the Resident Evil movie series and it was not good.  The first one was the best one, the second one was ok but the rest I barely remember and I think that is for the best.  This was just not good.  I think the story line has totally degraded into something that is ridiculous.  But hey, it’s a video game movie, it’s suppose to be over the top but it’s also suppose to be entertaining, which this flick is not.  Sure some of the zombie/creature make-up was good but I just don’t like this character of Alice, not since the first movie.  This gets 1.5 brains eaten out 5.

I really liked Paranormal Activity and Paranormal Activity 2 was good, not great. Paranormal Activity 3 left me thinking it’s time for the franchise to stop, it wasn’t that good.  Then Paranormal Activity 4 came out (and I believe PA 5 is due this October) and from what I saw, the reviews were poor.  For good reason.  Why the hell is girl carrying a camera EVERYWHERE she goes?  Including the dark house that the creepy kid lives in after finding something disturbing in her bedroom.  Why…that is question I asked a lot during this flick….why?  There was one scare out of the whole thing and the big reveal was not that big.  I’m avoiding spoilers for anyone who hasn’t it and is planning on watching.  I’m just glad I waited until it was on Netflix to see it and I won’t be running to the theatre to see part 5.  Paranormal Activity still stands as one of my favourite ghostish movies and the last two have sullied the first two.  Booooo….and not like a ghost.

This entry was posted on August 4, 2013 by Denise in Movie Reviews, Reviews and tagged Paranormal Activity 4, Resident Evil, Sterling Archer.