The Gist: Recovering alcoholic and struggling writer Jack Torrance takes his family to the Overlook to spend the winter in the luxury hotel as the caretaker.  The snowbound family soon begins to experience paranormal phenomenon or it is the isolation that is making Jack go something, something…go crazy…don’t mind if I do. (Marge & Homer Simpson, The Shinning). 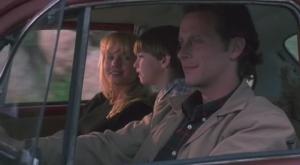 My Sentiments: Let me preface this by saying -and this may not go over well – I did not like the Stanley Kubrick version of The Shining.  There are iconic moments in the Kubrick classic such as the bloody elevator and the creepy twin girls, but I didn’t like the casting which tainted it for me.  I felt Jack Nicholson was too old (or just looked that way) and not suited for the role of Jack Torrance and I can’t stand Shelley Duvall normally and to have her as Wendy was all wrong, to me at least.

I was hoping that with the casting of the mini-series being more in line with the book, The Shining would be a good and more true representation of the King classic.  Which it was however it was still not great.  There were good things but it was a flawed attempt at making King’s work come alive on the screen, like so many before it.  The story is well-known: Jack, Wendy and their physic son Danny head up to the Overlook hotel in the Colorado mountains to live as caretakers for the winter in isolation.  Once the snow comes they are trapped and Jack, an alcoholic with no booze and writer who can’t get writing, snaps and goes on a rampage to kill his wife and son at the behest of the ghosts of the hotel.  Danny uses his Shining to call Dick, the cook who also has physic abilities, to save them but he gets attacked, the hotel blows up and Wendy and Danny go on to live another day or two or more. 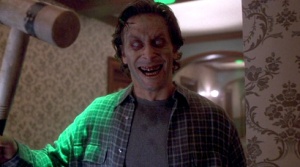 Final Thoughts: The casting was good and appropriate for the story, the story is good, of course but the execution was flawed.  It was way too long and could have been condensed into 2 hours.  It felt like they used filler to draw it out into a mini-series.  The hotel looked beautiful and grand which is unlike the Kubrick version where the hotel was done up with god awful 1970’s/1980 colours and decor (ok, it was 1980 but it is still unpleasant to the eye). One big gripe I have with this version is the floating Tony character.  What the happy hell was that?  It was terrible, just terrible.  And yes, I saw that the floating Tony was Danny on his grad day but come on.  I can’t get over hearing lines from The Simpsons version of this in Treehouse of Horror V (1994), so that may have marred any incarnation of this story for me but in the end, don’t bother watching the movie or mini-series, read the book.  And on that note, it will interesting to the read the sequel to The Shining, Doctor Sleep coming out later this year from Mr. King.