The Gist: A small Maine village is cleaning up after a brutal storm only to be enveloped by a mysterious fog that hides all manner of mysterious and deadly creatures. Trapped in a supermarket, a group of people must decide whether to wait out the fog or venture into the mist in hopes of escaping it. 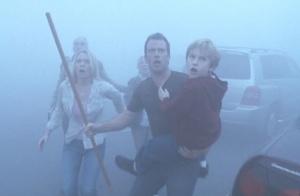 My Take:  This is one of my favourite Stephen King adaptations so far. The movie is based on a short story that was featured in the Night Shift collection and was eerie, unnerving and claustrophobic.  The movie doesn’t quite have the same feeling of tension as the characters are left essentially blind with the dense mist hiding everything but it is still well done and well told.  The strong male lead is portrayed wonderfully by Thomas Jane (The Punisher, Hung) taking on the classic King hero type – likable, unassuming loyal husband and good Dad and the creative type. Joining Jane is Andre Braugher (‘Salem’s Lot, Homicide) as his disliked lawyer neighbor who visits from the city and is not a local; Marcia Gay Harden (Damages, Whip It) as the religious fanatic inciting God’s wrath as the reason for the killer fog and pushing the other refugees to punish those who don’t believe her.  Thrown in to the mix is Jeffrey DeMunn (The Green Mile, Storm of the Century, The Shawshank Redemption, The Walking Dead) and the leading lady is Laurie Holden (The Walking Dead, The X-Files).

It wasn’t so much the characters in this story that made it enjoyable but more the fog and mystery and fear of what is hiding in the hazy depths.  When the creatures start to emerge and their ickiness is revealed, we see that they are well crafted and totally creepy, especially the spider critters below. I hate spiders and spider-like beasts. 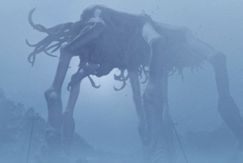 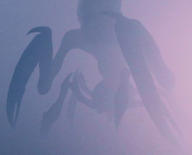 For anyone who watches The Walking Dead (Season 3 is so good and better than Season 2) you will recognize 3 of the actors from the series in this movie (Laurie Holden, Jeffrey DeMunn and Melissa McBride; Mcbride was credited in The Mist as Woman with kids at home) which is directed by Frank Darabont, one of the show runners of TWD.

Yah or Nah: Ok, so I didn’t say too much about the movie but it is a great flick and this is a Yah. I really enjoyed it and the end is such a punch in gut and different from the short story but it works very well on film.  Also, on the Blu-Ray edition the movie is offered in black & white which is a nice variation.

2 comments on “The Mist”