Oh, holy night, the stars were brightly shining.  Yeah, there was nothing holy about this Christmas episode of Asylum (obviously, given the title).  This is my kind of Christmas tale filled with blood and betrayal and aliens?  Ok not the aliens so much.

The episode starts out with Briarcliff’s resident of the week being Santa Claus a.k.a. Leigh (played creepily and wonderfully by Ian McShane).  Leigh has been a resident of Briarcliff for about year after killing several people at Christmas while dressed as Santa.  He was sentenced to solitary by Sister Jude and is none to happy about it.  Of course he did bite the face off one of the orderlies during the Briarcliff Christmas party the year before, so yeah, he kind of deserves it.  After that debacle, Jude cancelled any further Christmas parties.

With Jude now gone from Briarcliff, Sister Mary Eunice has reinstated the celebration bringing back the decorations, festivities and jolly old Saint Nick when she gives Leigh a shiny new Santa’s suit.  Monsignor Howard is thrilled with what Sister Mary Eunice has done, from the tree with the decorations gathered from hair and other items from the patients, to their very own Santa.  Howard presents to Sister M.E. a nice and pointy star to put on the top of the tree.  You can guess where that goes as Leigh snags it and slices open Frank the security guard’s face; back to the hole for Leigh. 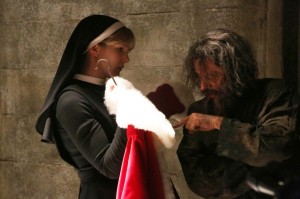 Elsewhere, Lana is in the infirmary with morning sickness (my theory only) and finds Kit doped up.  She removes his IV and heads off into the asylum in search of a phone but ends up coming face to face with Oliver.  But never fear, the ever chivalrous Kit knocks out Thredson and they tie him up and put in a storage room for later.

Poor Jude is still getting screwed over by Arden and the demonic Sister M.E.  Jude is now fully aware of the demon living in Mary Eunice and goes on a mission to save her soul.  Arden also realizes that Sister M.E. is not herself and goes to Jude asking for help to bring back the sweet and naïve Mary Eunice he loves.

After Leigh is taken back to solitary, Mary Eunice and Frank have an exchange in front of his cell and she slices open his throat.  Arden was concerned that Frank was going to go to the police and tell them what happened to Grace so Mary Eunice fixes that problem then lets Leigh out of his cell.

Jude waits in her former office for Arden to bring in Sister Mary Eunice but gets a horrifying surprise when Leigh is locked in the room with her. He punches and canes Jude then throws her on a bed preparing to rape the Sister.  She ends up stabbing him in the throat and putting an end to the mad man.

Finally, the aliens.  Arden is in the death chute to dispose of Grace when a bright light blinds him, forcing him to cower as a long, grey bony finger appears.  When the light stops a few seconds later, Grace is gone. Really? Fucking aliens?

Final Thoughts: I like Ian McShane and he played the creepy, psycho Santa fantastically.  I was hoping that Jude would get some sort of revenge, knowing that she wouldn’t be successful yet but I didn’t really see the attack by Leigh coming until Mary Eunice let him out of solitary.  The rest of the episode was pretty scarce in terms of moving story lines forward and I just don’t get the aliens.