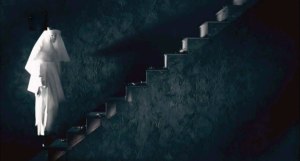 Briarcliff has another visitor as the Angel of Death makes an appearance.  Spoilers for this episode included and a minor spoiler for the next one at the end.

Grace is on death’s door, feverish and bleeding massively from what everyone believes is a botched sterilization performed by Dr. Arden.  Arden disputes his involvement when Mary Eunice confronts him but as he tries to enforce his dominance and power as the head of Briarcliff, Sister M.E. puts him in his place and shows her true power by throwing him across the room.  Arden is obviously stunned and not sure what the hell just happened. 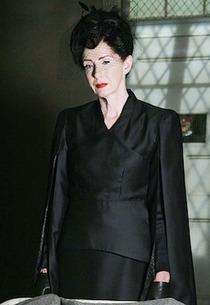 As Grace slowly dies, the Dark Angel (played by the returning Francis Conroy) asks her if she is ready; Grace says yes but Arden is there to administer antibiotics and save her.  Death moves on to a random Briarcliff resident who tries to silence the voices in his head by sticking his wrists in a meat slicer. Sister M.E. comes in to find a name (looked like One but it was apparently Aramaic) written on the wall in blood. She asks the guy why he summoned her but he has no idea what she is talking about.  Mary Eunice, or rather the demon, is clearly shaken by the presence of her dark cousin (see how I worked the title in there).  Later, Dark Angel encourages meat slicer man to end it all and gives him the kiss of death.  Sister M.E. walks in and the demon and the dark angel have a nice little chat but is it obvious that Sister M.E. is unnerved by the angel’s presence.

And then we move to Oliver raping Lana.  I saw that coming after their last moments together in the previous episode and it goes to lend credence to one of my theories that the 2012 Bloody Face is Oliver’s son.  After the violation, Lana gets a visit from Dark Angel and waivers between being ready to die and wanting to live but Oliver interrupts their exchange, upset with what he has done, not for the reasons a normal person would be but because of giving in to his baseness.  He decides the only thing he can do now is kill Lana. Lana won’t be his victim anymore and kicks ass before running out of the house, stopping a passing car and jumping in only to end up with a very anger, misogynistic man who blows his head off and crashes the car.  What are the odds that this happens – pretty fucking slim.  When Lana wakes up she is back at Briarcliff.  Lana tries to tell Mary Eunice what happened and while the Sister acts sympathetic and knows it to be truth, she tells Frank (the security guard) that Lana is delusion and confused from the accident.

Sister Jude is at the motel trying to figure out what to do about the dead Nazi hunter when she spots a bottle of booze, kindly left by Sister M.E. and decides to drink it while recalling the past.  We see Jude’s fall to ruin and how she ended up becoming a nun; not overly interesting.  When Jude returns to the present, she gets a call from Sister M.E. who admits killing the Nazi hunter and knows about the hit and run.  Jude is on the edge and receives a visit from her old friend Death.  Jude is ready to die but she has one final thing to do; she must face the parents of the girl she ran over 15 years earlier.  When she does, she is shocked and confused to discover that the girl, Missy, didn’t die and has been alive this whole time.

And to close out the episode, Kit is with his lawyer who is trying to tell him that he needs to convince the jury that he is crazy, not just homicidal.  Kit tells him that Grace saw Alma alive but the lawyer counters, pointing out that Grace is in a mental institution and on the verge of death, so not really a viable witness.  In a desperate move, Kit beats the crap out of him and heads back to Briarcliff, cutting through the underground tunnel and pursued by one of Arden’s creatures.  Kit finds Grace in the kitchen and the creature kills a nun and attacks him but Kit cuts open the beasts stomach kind of gross with the guts spilling out everywhere  just as Frank shows up and shoots at Kit.  Grace jumps in the way and takes the bullet.  Death finally gets one last smooch with Grace.

Final Thoughts: I liked the Dark Angel but I was hoping for more of an interaction between her and the demonic Sister Mary Eunice.  Kit’s chivalry and trying to save Grace is kind of whatever but when the creature is chasing him and finally attacks, that is the only highlight of this story line.  The Sister Jude stuff was Meh but I can’t wait to see if she goes back to Briarcliff with renewed malice and a thirst for revenge.  Oh, Lana.  I felt it was a bit contrived to have end up with another psycho after escaping Oliver.  Not a bad episode with the only real highlight being the Angel of Death.  The next episode is titled Unholy Night (and surely the last for the year) and has Santa Claus, played by the brilliant Ian McShane, arrive at Briarcliff.