The Walking Dead: When the Dead Come Knocking

Only one more episode before the mid-season finale and the prison survivors and Woodbury are finally on the verge of colliding.  The preview for next week looks awesome when Rick, Daryl and Michonne enter Woodbury.

In Woodbury this week, Merle is going to town on Glenn trying to get him to spill the goods on where the rest of the group and Daryl are.  Glenn tries to play it up saying Jim and Dale and Andrea are all with Rick but of course Merle knows the truth. In his anger at Glenn’s refusal to tell him where his brother is, Merle releases a Walker to attack Glenn who is taped to a chair.  Never fear, Glenn kicks ass and kills the Walker after he frees his hands.  Maggie is left in the hands of the Governor to be degraded as he tells her take off her shirt and bra.  He bends her over the table, implying he is going to rape her but he doesn’t.  Maggie and Glenn are reunited and the Governor finally gets his answer about where the survivors are after he puts a gun to Glenn’s head and Maggie tells him.  Glenn wouldn’t even give up the information as he looked at Maggie half-naked, being touched by the Governor and not with a gun to his head.

After Rick brings Michonne into the prison (thanks Carl), she tells him about Woodbury and that Glenn and Maggie have been taken there.  She fails to tell him about Andrea and Merle and I’m pretty sure that she must know that these are the people that Andrea was with and that they know Merle as well.  Rick heads to Woodbury to get Glenn and Maggie back and check out the town.  I think when he first heard of the secure town, he probably thought it would be a sanctuary but he reads Michonne’s body language and hears it in her voice that this is not the safe haven he is hoping for.

On the journey to Woodbury, Rick, Daryl, Michonne and Oscar are overwhelmed by Walkers and hide in an old house inhabited by a hermit that is going to open the door and let the Walkers inside.  Michonne kills the man and Daryl and Rick throw his body to the Walkers in order to escape through the back door.  Only Oscar is somewhat disturbed by the killing of the man and using him as bait.  I think he starting to see what normally good folk are willing to do in this new world.

Milton, the Governor’s doctor buddy, is experimenting and trying to determine if he can bring cognition and humanity back to Walkers.  He uses a dying old man, who volunteered to be his guinea pig, to observe as he dies and comes back.  Milton thinks he can do it and unties the Walker and is inches from having his face bitten off when Andrea sticks a knife through his head, saving a terrified Milton. 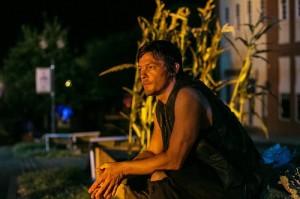 Final thoughts:  I understand why the Governor is giving Milton free rein to experiment and try to find a way to bring Walkers back to being human (hopes that his daughter Penny can be saved) but this part of the show was boring.  I was thrilled with Rick, Daryl and Michonne kicking Walker ass and can’t wait for them to get to Woodbury.  The meeting with Merle and Daryl is going to be tense and I think Daryl is going to be severely conflicted about his loyalty to his brother and to his new family – Rick, Carl, Carol and the others.  Oh, oh and the preview that was shown during the Talking Dead was such a tease.  Michonne finds Penny but doesn’t know she is Walker, thinking the Governor is keeping a child tied up with a bag over her head because he’s a sick f**k.  It should be a great episode that will make me curse that it won’t be on again until the New Year.