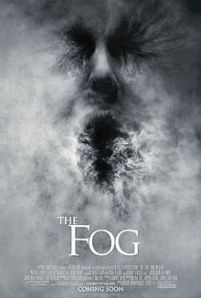 The Gist: A young woman returns to her small coastal hometown just in time for it to be overwhelmed by a mysterious fog filled with plague ridden ghosts of mariners who died hundreds of years earlier.  The plague victims wanted to settle on part of Antonio Island but the town’s founding fathers refused to let them for fear of the plague spreading to their townspeople but they did want their riches. The solution to keep them out and get the loot, burn them alive on their ship.  Now the ghosts want revenge on the town and the descendants of the founders.

My Take: The first thing that struck me about this flick was the location.  This is another one where I recognize the coastal locale as being close to home.  Good old west coast Canada posing as coastal US. Elizabeth returns home to Antonio Island 6 months after leaving without a word to her Mother or her ruggedly handsome boyfriend, Nick Castle. During her absence Nick got busy with Radio broadcaster and yummy Mommy (I hate myself a little for using that term) Stevie Wayne who he blows off after his absentee woman returns.  This aspect was unnecessary as their relationship was not touched on again. Elizabeth proceeds to have strange dreams, or are they memories, of people burning alive and drowning in the ocean. This movie wasn’t scary and the unleashing of the ghosts was contrived.  Hitting a bag containing old artifacts from the sinking ship? Really, after all that time.  And then Elizabeth finds a mysterious journal buried in a stone wall after she almost drowns; further implicating that she is the reincarnation of the long dead lover of Captain Blake.

Critique Much: Dull, dull and more dull.  The story was boring and the typical character of the girl who must crazy and no one believes until it’s too late aspect, was just too clichéd to be interesting. Then there is the mysterious journal that holds the answers, pile on more clichés.  The cast was damn pretty but that seems to be typical in these types of horror movies. And the end of the movie?  It was just a one night event for a dead man to get his girl back.  Lame.

Yah or Nah: It is the time of year for Halloween and I would like to say this is a good movie to watch during this season but it’s not.  Nah.  I wanted to like it but I just couldn’t stay interested. The scares aren’t there and the story is just plain boring.  But the location is beautiful.  I recommend watching The Mist (2007) for a truly superior movie where the monsters are effective and the story is infinitely better.