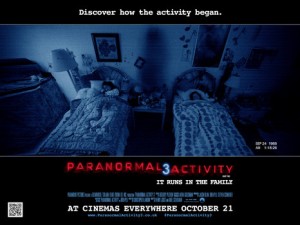 The Gist:  The third film in the very popular Paranormal Activity franchise takes the viewer to the beginning of the demonic hauntings of Katie and Kristi.  Set in 1988, the girls are living happily with their Mother, Julie and her boyfriend, Dennis in a beautiful new home. Dennis is a wedding cinematographer and after strange things start to happen, he decides to set up cameras throughout the house to document the events.

My Take: I loved Paranormal Activity and Paranormal Activity 2.  The twist that the demon was originally attached to Katie’s sister Kristi, then transferred to her as part of a deal that Kristi made with the demon, was an interesting turn (from PA2).  With PA3, I liked the part where you could see the point at which Kristi agrees to the demon’s request to give up her first-born son.  A child agreeing to something that she may not fully understand.  The demonic attacks were far less intense in this movie and there seemed to be more emphasis on producing scares.  I liked the earthquake scene where the dust covers a figure then falls to the ground and the scene with the white sheet figure that disappears behind the babysitter. Those are the types of scenes I enjoy but I found them too few and far between.  And the witches coven, promising the demon a tribute, was a bit off for me.  What did the women receive in return?  Maybe I missed the benefit of worshiping this beast unless it was being attacked and scared to death.  Not much of a benefit in my opinion. It also strikes me as odd that Katie would be tolerant of Micah’s camera fetish after what she went through with Dennis but I guess that can be explained away by her memory being erased or her memories being purposely suppressed as part of the ritual by the witches.  The last 20 minutes just seemed a little out of scope.

Critique Much: This truly was a slow burn horror movie.  It felt almost a little too slow with the scares being very staggered in my opinion.  And I don’t know why but I did not care for the reasoning that the demonic hauntings came from an ancient witches coven that the girls’ Grandmother was apart of. It just fell flat.

Yah or Nah: Even though I was not impressed with the last 20 minutes of this flick, I say Yah if you have watched the first two in this franchise.  I liked getting some of the background and seeing the first attacks by the demon and Kristi’s interaction with Toby, the name she has given the beast.  I’m quite hesitant on seeing Paranormal Activity 4 next week even though I know it’s to take place in the present after Katie disappeared with Hunter.  We shall see.