Movie Goodness continues with the Comedy List. There are many great comedies and I’m sure there are a lot not listed here that others think are great but I’m fussy about my funny. Here are my top comedies and the short list of honorable mentions; good but not my tops. 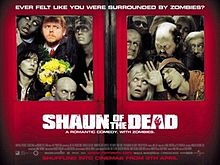 Shaun of the Dead (2004):  Shaun is an every man stuck in a mindless daily routine (so many of us are) but when a zombie apocalypse breaks out, Shaun goes from a loser to a hero. Along for the ride is his best friend Ed, his girlfriend/ex-girlfriend Liz, her two friends, his Mom and his step-dad played by Bill Nighy. Funny, the zombies are decent looking and Simon Pegg and Nick Frost are fantastic.

Tropic Thunder (2008): While filming a movie based on Vietnam vet Four Leaf Tayback’s autobiography, the frustrated director decides to take his spoiled actors off set and plunge them into the Vietnamese jungle which is the territory of a pint-sized drug lord. The actors think the drug lord and his village are part of the movie but soon realize what is happening is real. Ben Stiller is such a good actor and when he plays funny and slightly clueless, he is brilliant. Robert Downey Jr. is hysterical as the Australia actor who goes to extremes to get into his role and doesn’t break character until after the DVD commentary. Add in Jack Black, Jay Baruchel, Steve Coogan, Danny McBride and an almost unrecognizable Tom Cruise and you have a great cast with a very funny and entertaining story.

The Hangover (2009): Four friends head to Las Vegas for a bachelor party and shenanigans ensue when the group is drugged, can’t remember what happened the night before and lose the groom.  Bradley Cooper (easy on the eyes), Zach Galifianakis, Ed Helms, Justin Bartha and Ken Jeong star in this raunchy comedy with appearances by Mike Tyson and Heather Graham.  Avoid the sequel.

Anchorman (2004): Ron Burgundy (Will Ferrell) is a good old fashion anchorman in the 1970’s, running the local news with his gang, Brian Fantana (Paul Rudd), Brick Tamland (Steve Carrell) and Champ Kind (David Koechner) and enjoying the perks of being the number one news crew.  Their world is turned upside with the addition of Veronica Corningstone (Christina Applegate), the first female anchor. I love lamp.

Dodgeball (2004): Yep, a movie about adults playing in a dodgeball tournament. Another Ben Stiller feature with Vince Vaughn, Christine Taylor, Justin Long, Stephen Root and Alan Tudyk.  This flick has some great one liners –Nobody makes me bleed my own blood – and the cast and story make for a fun movie about the underdog triumphing over bullies.

Jay & Silent Bob Strike Back (2001): Jay (Jason Mewes) and Silent Bob (Kevin Smith) decide to go to Hollywood and get their motherf***ing movie cheque when they find out that the comic based on them is being made into a movie. There are many celebrity appearances and one liners poking fun at Hollywood.  Not necessarily one of Smith’s best movies but overall, it’s one of my favourites just for the fact that it is senseless humour.

Monty Python and The Holy Grail (1975): I started watching Monty Python about 20 years ago and I’m glad I did. This and ‘The Meaning of Life’ are my two favourites. King Arthur and his knights of the round table are on a journey to find the fabled Holy Grail and encounter all kinds of foes and humourous situations along the way.  A classic that everyone should see. The only downside is that the end is kind of silly but then again, it’s Python.

Hot Tub Time Machine (2010): Poison, mullets and neon clothes, ah the ’80’s.  A group of friends who have lost touch over the years, head to their favourite ski resort only to be transported back to 1986 after getting drunk, and spilling a Russian energy drink on their hot tub’s control panel.  Yes, that is the premise and yes, it is actually quite funny with a good cast: John Cusack, Craig Robinson, Rob Corddry, Clark Duke and Cripson Glover.

Ace Venture Pet Detective/When Nature Calls (1994 & 1995): Alrighty then.  Jim Carrey put himself on the comedy map with these two movies (in my opinion anyway). Ace is a pet detective hired by the Miami Dolphins to find the missing mascot, Snowflake the dolphin, and gets into all kinds of ridiculous situations but comes out the hero in the end.  In the follow-up, When Nature Calls, Ace is asked to go to Africa to find a missing albino bat and prevent two tribes from going to war.

Get Him To The Greek (2010): Russell Brand is brilliant as Aldous Snow, the drug abusing, hard-drinking musician who appeared in ‘Forgetting Sarah Marshall’.  Aaron Green (Jonah Hill) is an intern at a record company and is tasked with getting Snow to the Greek theatre in L.A. for the 10 year anniversary of his hit album.  Of course it doesn’t go smoothly and they encounter all kinds of crazy situations.  Rose Byrne as Snow’s ex-wife is great (she’s a wonderful actress) and there are many celebrity appearances.  Aldous Snow was one of the best parts of ‘Forgetting Sarah Marshall’ and I’m glad that they continued his story with this flick.