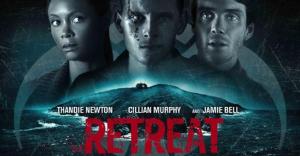 The Gist: A married couple (Cillian Murphy & Thandie Newton) head to an isolated island to try to repair their fractured relationship when a mysterious stranger, bloodied and wet, stumbles up from the beach and passes out before they can talk to him. They discover a gun on him and when he regains consciousness, he tells them that a virus has broken out and is sweeping across the country and they must isolate themselves in the house to avoid infection.  The only communication they have with the outside world, a CB radio, appears to be not working and they can’t get help or get any information on the outbreak.

My Take: I was drawn to this movie because a) Cillian Murphy is in it and I am always drawn to him and those amazing blue eyes, b) Thandie Newton is in it and I think she is a wonderful actress and c) the story seemed interesting and the trailer was intriguing.  The atmosphere is tense with the overwhelming sense of isolation growing as the trio board up the house and become more and more cut off.  It is quite effective to pull the viewer in to what the characters are experiencing and left me feeling slightly claustrophobic.  The feeling of being trapped is even more emphasized as Jack takes control and basically takes the couple hostage.  The acting was good but I didn’t really find myself caring too much about the characters and the reason for the fracture of the marriage was glanced on but didn’t really have an impact on the story for me.  Jamie Bell was good as the sketchy stranger whose story is hard to believe: he is a soldier from a nearby base who escaped before the outbreak hit him.  Bell was also believable as the alpha male and captor whose demeanor changes when the truth comes out.

The virus is actually in Jack.  He was in a military hospital instead of prison, and they experimented on him, infecting him with a virus making him a carrier and then releasing him and the virus into the world.

Critique Much: I liked this movie for the most part but I found the characters of Martin and Kate to be weak.  The actors did well with what they were given.  The best part of the flick was the last 10 – 15 minutes and the ending was not expected but was really good.

Yah or Nah: I would say Yah even though the characters were weak.  It is somewhat short, the story idea is interesting and the setting is tense and effective. Give it a try but maybe when it’s a free watch.