UPDATE: Just added one more – Shameless at the bottom. 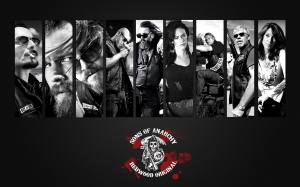 Sons of Anarchy: The trials and tribulations of SAMCRO (Sons of Anarchy Motorcycle Club Redwood Original) in the aptly named Charming, California.  Headed by the president, the aging Clay Morrow (Ron Pearlman) along with his VP and stepson Jackson ‘Jax’ Teller (Charlie Hunnam), the show starts with the building discord between the way that Clay runs the club and the way that Jax wants to change the organization and move it away from criminal activities. Complicating matters and throwing a wrench into both of their plans is Clay’s wife and Jax’s mother, Gemma Teller Morrow (Katey Sagal also the show creator’s wife) and Jax’s old high school flame Tara Knowles (Maggie Siff).  The writing is superb and the rest of the cast rounds outs the show wonderfully.  SOA will be entering its 5th season this September and airs on FX. 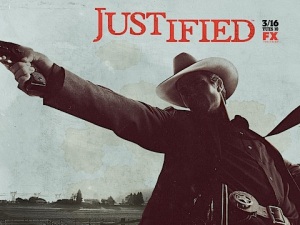 Justified: Deputy U.S. Marshal Raylen Givens (Timothy Olyphant) has a habit of shooting people but it’s always justified.  Based on an Elmore Leonard character of the same name, Givens dons a cowboy hat and boots and dispenses his own version of justice walking a thin line between traditional law and his own law.  Raylen is transferred to his home state of Kentucky after shooting a man in a hotel restaurant (it was justified) and he is not pleased.  Along the way he reunites with his abusive father, his ex-wife, a woman who had a crush on him years before, a former co-worker who is now his boss and his nemesis and former buddy, Boyd Crowder played wonderfully by Walton Goggins. Justified debuted in 2010 on FX and Season 4 should be starting in early 2013. 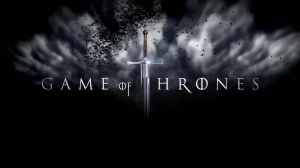 Game of Thrones: Umm…who hasn’t heard of this show yet.  Based on the book series, A Song of Ice and Fire by George R.R. Martin, seven families battle for supremacy in the mythical land of Westeros.  This is an amazing show.  Acting, production, writing are all brilliant.  No, I have not read the books and No, I will not read them.  Before the show debuted on HBO in April 2011, I tried to read the first book, Game of Thrones and couldn’t get past the first 40 pages.  I have tried a few times since and even tried moving on to Book Two after the second season started (April 2012) but I just can not get into them.   Aside from that, I love this show and recommend it to everyone. The third season will air Spring 2013. 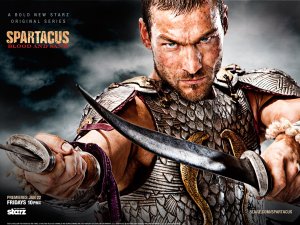 Spartacus: Sex, violence, more sex, more violence and no shortage of naked and beautiful bodies are the centre piece of this Starz original series that premiered in 2010. Oh and there is a good story among the naked flesh too.  It took me awhile to get into this, maybe to just get past all the large…swords swinging everywhere but I finally did start to like it about 4 episodes into the first season. The show centres around an enslaved Thracian warrior dubbed Spartacus (Andy Whitfield) by his captor/master Batiatus (John Hannah).  Spartacus’s movtiviation throughout the first season is to get vengance on the Roman soldier who enslaved him and sold his wife to a life of torture, rape and slavery.  The show hit a hiccup when Andy Whitfield was diagnosed with non-Hodgkin’s lymphoma and passed away in September 2011.  The show continued on while he was in treatment by airing a season that was a prequel, Gods of the Arena, and showed how many of the charaters from Blood and Sand came together.  In 2012, the 2nd season aired with a new lead actor taking on the role of Spartacus (Liam McIntyre) and it was alright.  It took awhile to get used to the new Spartacus but by about the middle of the season, it was getting better.  I believe there is one last that will be airing next year. 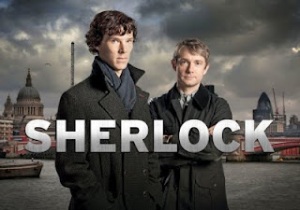 Sherlock: A modern retelling of Sir Arthur Conan Doyle’s iconic sleuth, Sherlock Holmes (Benedict Cumberbatch) and his sidekick Dr. John Watson (Martin Freeman). I’ve never been a fan of Sherlock Holmes and have struggled to read any of Doyle’s work but this show is brilliant and I prefer it over the recent Robert Downy Jr. movie. The show plays on BBC and I believe it airs on PBS in Canada but the first series is on Nexflix Canada now.  There have been two series’ (seasons) thus far with the episodes running at about 1.5 hours each with 3 episodes per series.  A different way to do a show, like mini movies.  Cumberbatch plays the eccentric genius wonderfully. A thoroughly enjoyable take on a classic character.  The 3rd season is TBD but will hopefully be out next year. 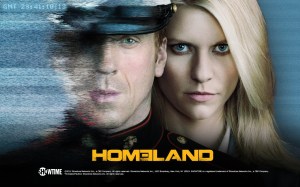 Homeland: After being held prisoner since 2003, U.S Marine Sergeant Nicholas Brody (Damian Lewis) is found in Iraq and returns home after 8 years to a life that is no longer his.  His wife, thinking he was dead, began an affair with his friend and his children don’t know him and don’t know how to act around him.  Adding to the stress is the constant scrutiny of CIA agent, Carrie Mathison (Claire Danes) who is convinced that Brody wasn’t a prisoner all those years and is plotting to carry out a terrorist act. Another highly recommended show which airs on Showtime and Super Channel in Canada.  The 2nd season is set to air this September. 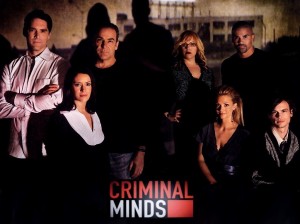 Criminal Minds: An élite group of FBI profilers travel the US hunting down and stopping killers and all manner of nasty people.  The show has been on the air since 2005 and as far as I know, it’s going to be around for another season this fall.  The cast has undergone a few changes over the past 7 years but the core members are still there:  Thomas Gibson, Shemar Moore, Matthew Gray Gubler, AJ Cook, and Kirsten Vangsness.  The show is in repeats and airs at least once a day on either Bravo or A&E and I love watching it again and again. 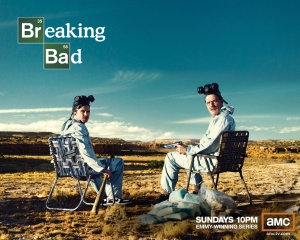 Breaking Bad: High school chemistry teacher Walter White (Bryan Cranston) is dying.  His wife is pregnant, he has a teenage son, medical bills and no money to leave them when he dies.  So he does the obvious and begins making and selling meth along with a former student, Jesse Pinkman (Aaron Paul).  My only issue with this show is that none of the characters are particularly likable or redeemeable for the things they do, still it’s a good show and character’s have evolved with the story. The 5th and final season started on Sunday on AMC. 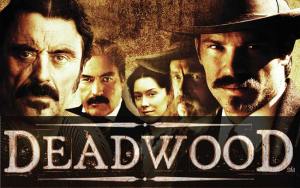 Deadwood: More HBO goodness. This old west drama had the filthiest language I have heard on TV.  Even Spartacus doesn’t have as much swearing as Deadwood. Set in 1876 Deadwood, South Dakota, the show takes the viewer to the growing town with former Sheriff, Seth Bullock (Timothy Olyphant) and his business partner Sol Star (John Hawkes). The pair are headed to the frontier town to open a store and reap the benefits of the growing population and gold rush.  Regardless of Bullock’s attempts to just be a merchant, the lawless Deadwood and its colourful inhabitants make it difficult.  Ian McShane as Al Swearengen is the hard as ice bar & brothel owner that Bullock battles often and he plays the role well. Deadwood aired from 2004-2006.

Breakout Kings:  Two US marshalls recruit a group of prisoners to help capture escaped prisoners.  Odd premise, using cons to catch cons but it was a pretty good show before being cancelled after the second season which ended in April 2012.  The deal for the cons was that for each runner they caught, they got a month off their sentences.  I really enjoyed it and wish I had watched it while it was airing.  My favourite character was Lloyd Lowery (Jimmi Simpson) a genius imprisioned after giving a college student prescription drugs illegally which led to her death.  A funny yet flawed and tragic character. 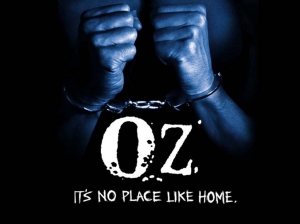 Oz: The Oswald Penitentiary is an experimental prison that houses all the baddies you expect to find in a maximum security jailhouse.  And boy, it is an unpleasant look at the penal system regardless of how close to reality the show is.  Maybe this one should be under horror because it is scary to see the things that the inmates do. This is not a show for anyone with a weak stomach. It’s intense.  The show aired from 1997-2003. 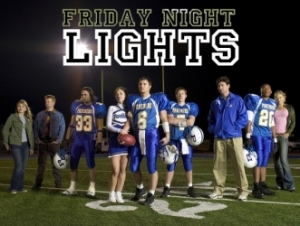 Friday Night Lights:  Friday night is football night in the small town of Dillion, Texas and at the centre of it, are the Panthers led by couch Eric Taylor (Kyle Channing). Another sports based show that doesn’t require you to know about or even like football. I was skeptical but once I started watching it I was hooked.  The show didn’t get much attention when it was on and I had never heard of it until around 2010, four years after it debuted.  The final season aired in 2011. 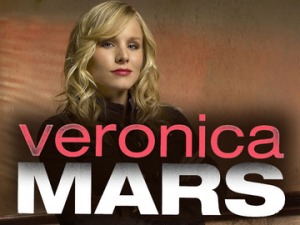 Veronica Mars: This one took some convincing on my husband’s part to get me to watch it but I did and I was surprised that it was a mature show dealing with some very serious topics.  Veronica Mars (Kristen Bell) is a high school student with a knack for snooping and looking into things she should not, taking after her PI Father (Enrico Colantoni).  The show aired for 3 seasons and when it was cancelled it left many questions in the balance and the show felt unfinished, which I suppose it was. Still, it was good. 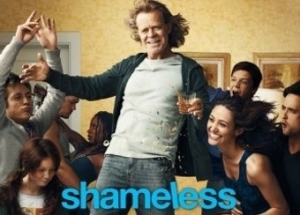 Shameless: Alcoholic father Frank Gallagher (William H. Macy) drinks his way through life while his eldest daughter, Fiona (Emily Rossum), manages the house and takes care of her 5 siblings in place of their mother and father.  Sad and funny, this show is another well done drama about the sad realities of how alcoholism impacts a family and drastically alters the lives of the neglected children who must rely on one another to try and stay together and keep a roof over their heads. Fiona has given up living her life for herself -no college, no real relationships – to be the head of the household but her world is turned upside down when she meets the charming, rich and deceitful, Steve (Justin Chatwin).  Shameless airs on Showtime and Super Channel in Canada.  The second ended in April 2012.