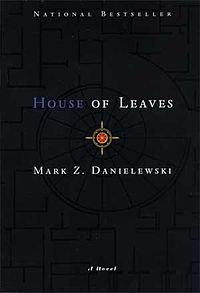 Well, where to start with this one.

A Novel History: Initially, according to the internet, the book was passed around in an underground sort of way – friend to friend, word of mouth and pieces popping up on the internet until it finally made it’s way to publication in 2000.  The unusual and sometimes difficult to follow format has been preserved for the publication: coloured text, awkwardly aligned footnotes and text, run on sentences that last for paragraphs.

OK, what is it about?  The book revolves around Johnny Truant, a tattoo shop employee who finds a disturbing and soul consuming manuscript among the belongings of a deceased old man, Zampanò. The manuscript is a study of a bizarre documentary film shot by Pulitzer prize-winning photographer Will Navidson.  Zampanò’s manuscript explores the film that documents the impossible conditions of Navidson’s newly purchased home in Virginia. Impossible because there is a previously non-exist hallway in the Navidson living room that appears to be infinite in size but does not intrude into the rest of house or protrude on the outside of the house.  There is no light, no light sources or windows within the hallway; it is impossibly cold and there is simply no end to it even though there are stairs and other doors leading to more completely dark hallways.  Not mention the growl that erupts out of the dark seemingly attached an equally unknown creature lurking in the impenetrable darkness.  The documentary film records 5 explorations into the unknown including one that ends in tragedy when 3 explorers traverse the mysterious hallway taking with them food, water, cameras, lights and a rifle.  The dark does strange things to the psyche and add in the absence of any knowledge or previous experience in this type of anomalous environment and death is sure to follow.

The story has a few different narrative perspectives and jumps from one characters tale to another, sometimes interrupting the flow for several pages.  There is Johnny Truant, the finder of the tome which he uncovered among Zampanò’s belongings after the old man died and Johnny’s buddy, Lude, invites him to go through Zampanò’s  apartment; there is Zampanò’s manuscript about the house and the film and finally is the story of Will Navidson and his experiences in the house.  So basically it’s like Johnny telling his own story and Zampanò’s story and Zampanò telling Navidson’s story and Navidson telling his own story.  This is not a difficult method to tell the story but the execution can be confusing at times to follow. Danielewski is a great writer and the story, or rather stories, are interesting even if at times it is disconnected.  Johnny’s story is incoherent in sections as his history and experiences are written generally as footnotes to Zampanò’s writing.  Incoherence and poor editing are acknowledged by Johnny in one of my favourite passages about editing and correcting mistakes in the manuscript – ” Zampanò himself probably would of insisted on corrections and edits, he was his own harshest critic, but I’ve come to believe errors, especially written errors, are often the only markers left by a solitary life: to sacrifice them is to lose the angles of personality, the riddle of a soul.  In this case a very old soul.  A very old riddle.” pg. 31

To read or not to read?  Read.  This book is difficult to put down as it is engaging and because it is difficult to pick up the thread again if you stop in mid chapter.  There were sections that I found somewhat dull and wanted it to just move on.  Beyond the intentional mistakes and the sometimes annoying layout of sentences only written on the bottom of the page, it is a good book.  I would recommend getting the e-book version as the paper copy is quite cumbersome.  House of Leaves is an interesting story told in a unique way.  If you have time to really focus on reading a unique novel, pick up House of Leaves.

This entry was posted on July 4, 2012 by Denise in Book Reviews, Reviews and tagged Johnny Truant, Will Navidson, Zampano.