Well, so much for writing and posting more. The title says it all: distractions. More accurately excuses but I prefer to say distractions. Work has been a major mental and emotional drain the past 4 months to the point where I just don’t want to think as well as being stressful with so much uncertainty floating around. The other new but good distraction is the little girl below, Jinx. She was born on April 1 and I adopted her about 2 months ago. Other things keeping me blocked are the usual – TV, movies, video games and sadly only a couple of books. 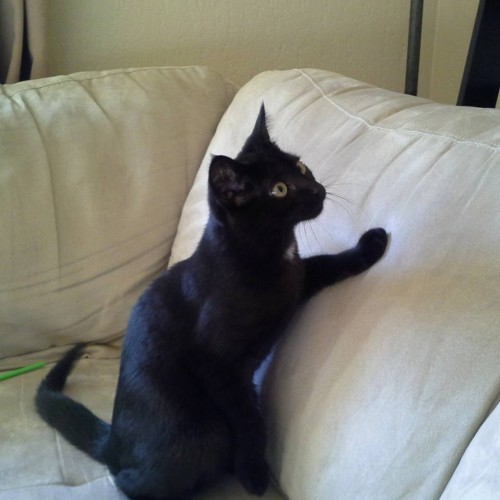 Stranger Things: Four pre-teen boys in the mid 1980’s are drawn into the world of monsters and alternate worlds after one dark and stormy night one of them goes missing and a strange girl with strange powers shows up. I didn’t like the first episode of this Netflix original but it grew on me after the next couple. There is a lot 1980’s nostalgia (which I think my husband appreciated more than me) and one of the characters played by actor Charlie Heaton reminded me of a young Stephen King. Overall, it was a pretty good series once it go going.

Preacher: Ugh…I had high hopes for this AMC series based off the graphic novels but it somewhat fell short. Dominic Cooper is great as Preacher Jessie Custer and Joe Gilgun makes a good Cassidy with the exception of the Irish accent he is trying to pull over his distinct British one. I’m not too crazy about the way that Tulip is being portrayed as a hard ass unflinching thief. Not how I remember her from the books. Also wasn’t crazy that Season 1 focused only on Annville, also a divergence from the books. The Saint of Killers stuff felt out of place because there was no context for it until the end. It felt like most of the time I had no idea what was happening. But the last episode leaves some promise that Season 2 will hit the mark. Maybe I just need to watch it again…

Penny Dreadful-Final Season: This final season that was only announced as the final season shortly before it ended also had a lot of promise but ended up being under-developed possibly because it seems that it was not intended to end the show. The introduction of Dr. Jekyll and Catriona Hartdegen would have added 2 interesting characters but sadly their time was too short and it almost felt pointless to bring them in, particularity Dr. Jekyll with his part in the story being ultimately useless. The show had such a divide between the characters that it didn’t work as well as when they were all together. And the Ethan/Vanessa love aspect felt off. I wish the show had continued and explored more of the Gothic Victorian monster mash that made it so good in the beginning.

Banshee-Final Season: Another good show ended this year and another disappointing season and ending as well. And the most annoying part is they never said what Hood’s real name was.

Outcast: Another Robert Kirkman based series. This one deals with demonic possession and one might say, mental illness. I have 3 episodes to watch still but it feels like there is something missing from the show to make it really good. I like it but it has that drag that The Walking Dead suffers from where it’s on the cusp of ramping up then has nothing but filler. I like the premise and will continue with it for now. As for as The Walking Dead, I think I still have the last 2 episodes to watch and I’m in no rush at all. Disappointing. Fear the Walking Dead has potential but again, too long to get on with it.

The Strain (Season 1 & 2 again): Season 3 premieres at the end of the month and I am looking forward to seeing how much of the 3rd book is in the show. Watching Season 1 again I recall now that the first couple of episodes were kind of meh but once it gets past the introduction and gets to the vampires and the hunters it improves.

Green Room: There have been a lot of really good reviews of this flick that takes place at an isolated white supremacist club in the pacific northwest. A low rank punk band gets a gig at the clubhouse, not aware of what they are getting into and becomes embroiled in murder and a desperate fight for survival simply by being in the wrong place, at the wrong time. Starring the late Anton Yelchin, I enjoyed this movie and it kind of makes you wonder how extreme these white supremacists really are.

10 Cloverfield Lane: I guess there are ties between this movie and Cloverfield which I started watching and promptly stopped. A woman is leaving home late one night (not sure why) and ends up in an accident. She awakens chained to a wall in what appears to be a basement. When her captor appears he informs her that the earth is under attack and the air outside the bunker is toxic. John Goodman is great as the captor Howard and the story makes you wondering if he is being truthful or if he is merely a psycho who kidnapped this woman for reasons unknown.

Hidden: Another bunker movie, this one stars Alexander Skarsgard and is written/director by the Duffer Brothers who are also behind Stranger Things. The primary location is in bunker as a family of 3 hide from an unknown and terrifying threat on the surface. They are eventually forced to flee the hideout and the truth of what has happened is revealed and is not what is expected but I rather enjoyed the twist and the general claustrophobic feeling of the flick.

Cell: I swear the only good Stephen King adaptation was The Mist. Cell was a good book, not great by any means but definatly better than this movie version of the story where cell phones drive people into a homicidal rage and then into a zombie like state. This reminded me of 1408 probably because it also starred John Cusack and Samuel L Jackson and the acting felt like the characters were trying to portray King’s vision of written stereotypes in the flesh. This was just not enjoyable.

Batman V. Superman: I didn’t hate it but it certainly wasn’t great. It was too long and hollow in story and I really disliked Lex Luthor. Wonder Woman was kind of cool but after the first 2 hours it needed to end.

Sinister 2: The follow-up to the creepy Sinister movie comes in as, meh. It’s sometime after the horror of the original and Deputy So-and -So is determined to end the nightmare of Bughuul. He comes across Shannyn Sossamon and her twin sons living in a house haunted by Bughuul and his ghost children. Much like other horror movies that impress with their mostly unique stories and then follow-up with a sequel trying to live up to that original splendor, Sinister 2 was OK but doesn’t really capture the thrill of the first and is unnecessary.

Green Inferno: No, just no. I don’t mind gore, obviously, but there was nothing remotely interesting about this cannibal story.

The Library at Mount Char by Scott Hawkins: Speaking of disappointment. This tale of librarians with special powers trying to find their “Father” failed for me. I didn’t finish it. I didn’t like it. The opening couple of pages were good but then it’s just magicians who are out of touch with humanity trying to be human. It felt childish even as the darker elements were played with on the surface.

Broken Monsters by Lauren Beukes: I quite enjoyed The Shining Girls by Beukes but Broken Monsters is taking a bit to get into. A detective is on the case of  a dead boy who is murdered and mutilated by having his lower half meddled with the body of a deer. I think it’s the detective’s daughter’s story that is kind of interfering with the twisted and interesting story.

Uncharted 4: I never played the first 3 but I really enjoyed this game that reminded in some ways of Assassin’s Creed.

Dragon Age: Inquisition: Finally, I have gotten into this game after 2 years. So far, so good.

The Last Podcast on the Left: Still listening to it, still loving it – Megustalations!

This entry was posted on August 6, 2016 by Denise in Musings and tagged Denise Pasutti, Megustalations, movies, Netflix, Preacher, TV.