The Gist: When legions of monstrous creatures, known as Kaiju, started rising from the sea, a war began that would take millions of lives and consume humanity’s resources for years on end. To combat the giant Kaiju, a special type of weapon was devised: massive robots, called Jaegers, which are controlled simultaneously by two pilots whose minds are locked in a neural bridge. But even the Jaegers are proving nearly defenseless in the face of the relentless Kaiju. On the verge of defeat, the forces defending mankind have no choice but to turn to two unlikely heroes-a washed up former pilot (Charlie Hunnam) and an untested trainee (Rinko Kikuchi)-who are teamed to drive a legendary but seemingly obsolete Jaeger from the past. Together, they stand as mankind’s last hope against the mounting apocalypse. (c) Warner Bros

My Take: What can I say about this flick that isn’t shown in the trailers…well it is quite the spectacle.  Visually this movie is stunning with the giant monsters and the giant robots and Charlie Hunnam and Idris Elba.  The monsters that have come through a breach in the ocean floor are pretty fantastic to look at.  The dull grey of their flesh is peppered with LED like light of blue and green and is pretty cool looking. The robots are like a kids toy super, super, super sized and the concept of having them controlled by two little people is interesting.  Talk about having to be compatible with your co-worker, especially when you enter their mind. 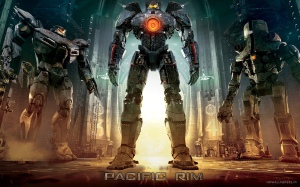 So the basics of the story is the monsters are invading and to combat these massive creatures, humans have created giant robots.  Seems like a pretty short simple story but things are getting more intense as more monsters are coming through the breach and it is discovered that they intend to destroy humanity and take over the earth; why else would be on earth.  It’s up to Raleigh and Mako and the father – son duo, Herc and Chuck Hansen to close the breach, with a nuclear bomb, and save the earth.

Here’s the thing about the movie.  It looks amazing in the IMAX 3D, wonderful presentation.  What it lacks, however, is a more engaging, developed story and the dialogue is somewhat weak and cliché.  There are some top-notch actors in this flick but they’re abilities are wasted. At least we get to see Charlie Hunnam with his shirt off, so not totally wasted. The comic relief of Charlie Day and Ron Pearlman was good but again it was overly cliched.

Final Thoughts: While this flick lacked substance in story and engaging dialogue, it looks freakin’ awesome.  This is the type of movie that is purely for visual entertainment.  I enjoyed it but I thought it could have been a little bit shorter.  Clichés aside, this is a fun movie that lets you just zone out and enjoy the war between monsters and robots.