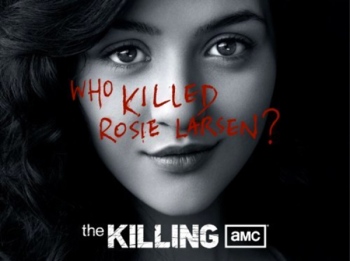 It took me 3 days to watch the first two seasons, 26 episodes, of AMC’s The Killing, the American version of the Swedish series “Forbrydelsen”.  I watched the first couple of episodes when the series started a couple of years ago but didn’t really get into until I started watching it on Netflix (the benefits of being on holidays) which I think is the best way to watch the series.  I rather enjoyed the moody, damp Seattle actually filmed in Vancouver atmosphere as the dreariness kind of reminded of the setting of my favourite video game Heavy Rain.  The first two seasons centre around Detective Sarah Linden’s (Mireille Enos) pursuit of the killer who took the life of 17-year-old Rosie Larsen.  Linden is suppose to be leaving the Seattle Police Department on the same day the case begins but she stays on, reluctantly at first, to catch the killer. Linden is partnered with her replacement, Detective Stephen Holder (Joel Kinnaman), a former junkie and unseasoned homicide detective who she doesn’t like at first but eventually warms up to as they continue working the case.

The two seasons are spread out over a period of 28 days (I think) with each episode representing a day in the investigation, more or less, which is another reason it was good to watch it on Netflix and not have to wait a year for the conclusion to the story.  Over course of the investigation, the pair encounters many suspects and many lives are brutally changed in the process as those suspects are investigated.  Linden goes through extreme turmoil in her personal life as she lets her job interfere with her son’s well being and her impending wedding.  The viewer not only gets to see how the lives of the police and the suspects are impacted but we also get a view of the victim’s family and how they are effected and deal with the trauma of losing a daughter in a horrible way.

I don’t want to give away too much as I think this is a show worth watching.  I recommend watching it like I did as it makes it easier to get engaged in this kind of series when you can watch more than one episode at a time.  I think my one complaint is that the main character of Sarah Linden is not the most likable person.  I often found that the decisions she made and her self-righteous attitude were unappealing but that didn’t take away from the enjoyment of the show.  I much preferred Holder and hope that his character continues to develop in Season 3.  Interesting note – apparently Season 3 was cancelled and not going to happen but it is going ahead now and will premiere on June 2.

This entry was posted on April 30, 2013 by Denise in Reviews, T.V. Reviews and tagged AMC, Joel Kinnaman, Mireille Enos, Netflix, The Killing.