The Gist: Carrie White, an abused and timid 17-year-old girl discovers she has telekinesis and gets pushed to the limit on the night of her school’s prom by a humiliating prank.

My Take: Another King classic that has been remade. I can’t speak to the remake as it isn’t out for a few more months but after watching the original again, for the first time in many years, I was actually impressed.  Some of the acting is laughable and some of the dialogue is just as bad but all in all, the movie is pretty good. The bad 1970’s clothes and hair aside, William Katt’s hair is so puffy, this flick is enjoyable.

The story is twisted and filled with abuse and many things that I can’t believe were the norm 37 years ago: teachers hitting students and not being sued, fired or arrested and teachers smoking in the school.  Carrie is kind of pathetic, meek, abused and hammered with biblical rhetoric but she transforms into a beautiful girl who is slowly gaining more and more confidence as the story progresses.  Along with her personality transforming, she is also accepting and understanding how to use her telekinetic abilities.  Carrie is not only the victim of abuse at the hands and words of her crazy ass Mother but she is bullied and hated by the bitches, err…girls at school.  Out of guilt, one of the bullies, Sue, talks her boyfriend Tommy into taking Carrie to prom but the other bitches are plotting to humiliate her.  Pig’s blood, eww.  Carrie’s telekinetic abilities come to the fore front and she slaughters everyone, believing that they all plotted to make her look like a fool, even those who actually liked her.  Blood, fire and general mayhem ensue culminating with Carrie getting back her Mother after year’s of abuse. 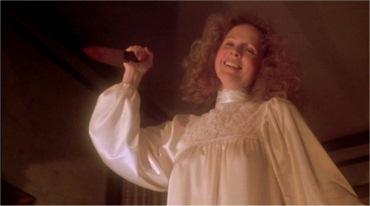