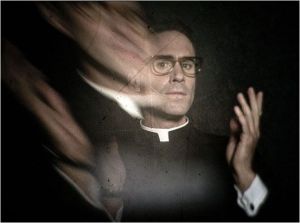 Here it is, the last new American Horror Story for 2012.

For those who didn’t hear before the episode aired, the modern-day Bloody Face was revealed and marked the return of Dylan McDermott.   He plays a psycho well but is he really the son of Lana and Bloody Face?  Or is he Kit and Grace’s alien baby? Oh right, about that.  Arden convinces Kit to let him kill him (Arden kill Kit) then revive him because Arden believes Kit’s story and is convinced that he is crucial to the aliens plan which is why Alma and Grace were taken -to have Kit’s alien baby’s?  Arden kills him and he remains that way while Arden follows the light that encompasses Briarcliff (why doesn’t anyone else see this or comment on it?) He finds a very pregnant Grace and a totally sane Pepper telling Arden they need to prepare for the birth.  Alrighty then.

And speaking of not so immaculate conceptions, Lana finds out that she is pregnant and is horrified that she is carrying Bloody Face’s child.  Sister Mary Eunice, of course, will not allow her to get rid of the baby, so she takes matters into her own hands and performs an abortion with a coat hanger.  Or not.  After Lana tells a bound and confined Oliver that she killed his baby, Sister Mary Eunice tells Lana that the baby is still alive and it’s a boy.  The demon knows all including where Oliver is resulting in Bloody Face being set free.

Jude is now a permanent resident of Briarcliff and will be for the rest of her life after she killed Frank the guard and attempted to kill Leigh (yep, he’s still alive) or so the witnesses are saying.  And finally, Jude has ended the constant playing of that song in the rec room.  No more singing French nuns.

Monsignor Howard is either naïve or too focused on his ambitions of becoming Pope as he takes Leigh under his wing with the hope of rehabilitating him.  Leigh maybe crazy but he is no fool and plays Timothy so easily, saying he wants to change and repent for his sins.  Timothy decides to believe Leigh and removes his cuffs to baptize him.  I saw it coming when Leigh shoves Timothy’s head in the baptismal pool and drowns him.  What I didn’t see coming was Leigh crucifying Timothy to the cross in the chapel.  Ouch. And as the episode closes, Dark Angel approaches the suffering Timothy.

Final Thoughts:  The exchange between Dylan Dermott and the therapist at the beginning was quite good as he explained how he started out skinning cats (not ok, man, not ok) and regrets not being able to go to medical school.  Aliens and alien babies…WTF.  I say it every week, I don’t care for this story line.  I want more with Bloody Face Senior and Junior and more with Jude and the demon sister.  Ian McShane was wonderful again and seeing Jude lowered to a patient is vindicating for all those she tortured.  Only 4 more episodes of this season left and I’m anxious to see how it will all end.