October Reflections: The Devil Inside (2012) 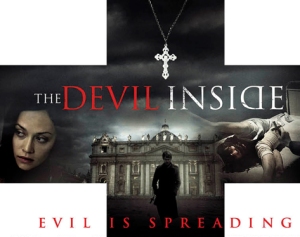 The Gist: A young woman, Isabella Rossi, travels to Rome to see her Mother, Maria, after 20 years of separation.  Maria’s been locked in a Vatican institution for the criminally insane after she killed 3 members of the clergy during an exorcism.  Isabella brings a documentary film maker, Michael, with her to capture the reunion and her investigation into why her Mother killed those people and if she was really possessed by a demon.

My Take: I don’t know what to say about this movie.  I believe it’s suppose to be a found footage flick with a hand-held (rather big) camera viewpoint, as Michael films Isabella’s journey from the US to Italy, getting the back story for her trip along the way.  Once in Italy, Isabella just walks into a class about exorcism being taught at the Vatican School of Exorcism.  Just walks in with a camera.  Doesn’t seem like the Vatican would allow such a thing to happen.  Anyway, she finally sees her Mother, Maria, and is shocked that she knows about an abortion Isabella had and is appalled by the inverted crosses which Maria has cut into her flesh.  From here, Isabella hooks up with Father Rawlings and Father Keane and proceeds to accompany them to an illegal exorcism and sees the horror of possession for herself and of course, we get it through the camera view of Michael. Onward to the exorcism of Maria conducted in a locked hospital room which ends in the transference of the demon who goes on to hop through each of the people who were present. I really don’t have much else to say.

Critique Much: I hated the ending to this flick.  It was like a copy of the ending of Paranormal Activity (which is far better movie).  I will admit there were a couple of scares such as when the lights go out and it is silent, then there is a big bang.  That made me (and my cat) jump.  And when they are performing the exorcism of the young woman Rosa, her twisted limbs are kind of gross.  But all in all, the movie was fractured and somewhat dull.

Yah or Nah: No surprises here as this is a Nah.  Enough said.

This entry was posted on October 8, 2012 by Denise in 31 Days of Halloween, Movie Reviews, Reviews and tagged Exorcism, Paranormal Activity, possession, Simon Quarterman.