I don’t really read many comics and certainly not the old school ones such as Spiderman or X-Men but there have been some really good movies based on comics and superheroes.  Here is my short list of heroes. 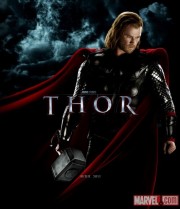 Thor (2011): Chris Hemsworth.  What, there’s more to the movie?  Oh, yeah I suppose so.  The Norse God of Thunder (Hemsworth), plummets to Earth after his father, Odin (Anthony Hopkins), has had enough of Thor’s arrogance and ego.  He loses his hammer and power but not his rugged good looks. Co-starring Natalie Portman, Tom Hiddleston, Stellan Skarsgård, Kat Dennings and directed by Kenneth Branagh.  The movie is visually stunning (not just Hemsworth), the effects were great and the Frost Giants were very cool.

Watchmen (2009): Who watches the Watchmen?  Anyone with access to the movie. Set in an alternate 1985, a group of former vigilante heroes come back together when someone starts killing them off in a somewhat convoluted plot to destroy the world.  A long movie but regardless of the weaving story, it was enjoyable and again, another visually stunning movie with a cast of unique characters and talented actors including: Jeffrey Dean Morgan, Billy Crudup, Patrick Wilson and Matt Frewer.

The Avengers (2012): The coming together of a handful of comic book superheroes: Thor (yah), Iron Man (Robert Downey Jr.), Captain America (Chris Evans) and the Hulk (Mark Ruffalo) and some other ones I don’t know too much about – Hawkeye (Jeremy Renner), Black Widow (Scarlett Johansson). Loki (Tom Hiddleston) schemes his way out of his prision and returns to Earth with many nasty friends in tow hoping to make a mess of our planet.  But Nick Fury (Samuel L. Jackson) and his band of bad asses are there to stop him.  This was a long movie but it didn’t feel that way because it flowed so well even with having to bring together a multitude of characters.

Batman Begins & The Dark Knight (2005 & 2008): I never cared for the first set of Batman movies that started in 1989 but this incarnation with Christian Bale as Batman is very good.  Dark and action packed with many great actors taking on the roles of heroes and villains.  I have yet to see the The Dark Knight Rises but so far the reviews I have seen are mixed.  I’ll see it sooner or later.

X-Men 1 & 2 (2000 & 2003): I remember the cartoon from Saturday mornings.  This is my favourite set of superheroes, Gambit is the best.  I also remember playing the cooperative video game.  Good times.  Again, another stellar ensemble cast, good stories and lots of mutant action. Sadly, X3 was not good, not good at all. 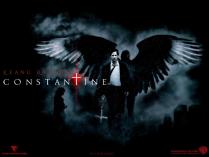 Constantine (2005): I didn’t really care for this flick the first time I saw it but after a second viewing and understanding a bit better the story, I did enjoy it. Angels and demons and Keeanu Reeves, good stuff.  Based on a story arc from the graphic novels, Hellblazer, Constantine is an exorcist who can perceive the true form of half angles and half demons on Earth.  Dying of lung cancer, Constantine is facing an after life in hell following a failed suicide attempt when he was younger.  In the movie he crosses path Angela Dodson (Rachel Weisz), a cop with a sixth sense.  A good movie that deserves a second look. Peter Stormare (Satan), Gavin Rossdale (Balthazar) and Tilda Swinton (Gabriel) round out the brilliant cast.

Sin City (2005): Another movie that I didn’t quite follow the first time but enjoyed upon a second viewing.  The cast is loaded with stars: Bruce Willis, Clive Owen, Jessica Alba, Mickey Rourke, Nick Stahl, Elijah Wood and many more.  I love the black and white style of the film and just the style in general.  The story jumps around between the characters which is why I had to watch it a second time to really appreciate it.  Good stuff.