The Gist: When the Davison family comes under attack during their wedding anniversary getaway, the gang of mysterious killers soon learns that one of victims harbors a secret talent for fighting back. (IMDB)

It seems like it’s been a long time since I’ve watched a horror movie or at least a good horror movie because being sick and not able to get off the couch offers plenty of time to watch bad horror movies.  But I digress.  Director Adam Wingard (V/H/S and V/H/S 2) brings us an entertaining feature with the animals hunting the humans.  I really liked this movie even though it didn’t offer much variation in the stalker/slasher genre.  A perfect family on the surface but dysfunctional in reality, gather at a huge beautiful old house in the country for the anniversary of the parents.  The four siblings and their significant others arrive and the bickering and fighting erupts over dinner but is soon interrupted by a shocking attack.

Things continue to devolve from there as bodies fall and the killers show themselves in cute animal masks.  See them below, so sinister and cute.

I guess what sets this apart is that Erin, the girlfriend of failed writer Crispian, is one kick ass bitch and does everything that she can to help the family survive the attack and keep herself from getting killed.  I won’t reveal how she became such a fearsome fighter but she is Australian and I guess since everything there can kill you, you might as well be able to defend yourself.

The truth behind the attack is revealed in the last 15 minutes but I had my suspicions shortly after the family starts taking bolts in the back. 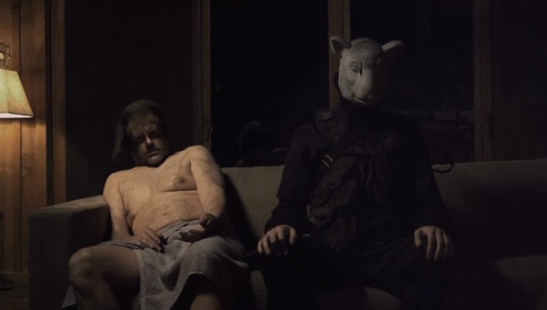 Final Thoughts:  This is the first thing by Adam Wingard that I enjoyed.  I was not a fan of either V/H/S movies but this one was a bloody, fun good time.  This was a good Friday night horror flick without too much thinking involved.

This entry was posted on January 22, 2014 by Denise in Movie Reviews, Reviews and tagged Adam Wingard, horror movies, slasher, You're Next.